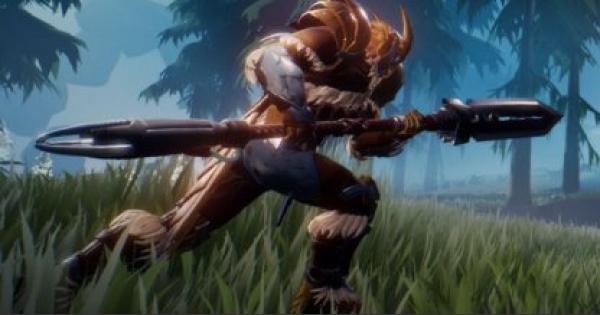 Learn all you need to know in mastering the War Pike in this tutorial; including combos, play tips, weapon mechanics, recommended War Pike and more!

The War Pike boasts of a high attack speed that specializes in dealing Wound damage to Behemoths. It can also sever Behemoth parts with its Aether Harvest attacks.

The War Pike has an Aether Bar feature that charges up when you use Aether Harvest attacks. When full, it can be loaded up and used as ammo or kept as is to deal increasing physical damage/

A well-placed & timed Pike Blast has the capability to boop or interrupt Behemoth attacks. This is useful against Behemoths that have many opportunities for interruption, making the hunt a quick & fast one.

Check Out How To Boop Behemoths!

When the Aether Bar is full, it increases the physical damage the War Pike can dish out per hit that connects. Keep this bar full & avoid taking Behemoth hits for continuous high damage.

The Inferno's Arrow is one of the best War Pikes when it comes to firepower. It has +3 Overpower bonus perk and 2 power Cell slots, making it very easy to build up your damaging power in hunts.

The Ember Pike provides a +3 in Evasive Fury plus technique and agility cells. It allows you to counteract the War Pike's lack of mobility by giving you more evasion Perks.

The Spire of Dawn's +3 Cunning gives you the chance to deal double damage with a War Pike. It also comes with technique and power slots, making it a flexible weapon to use and allowing you to play around with your builds.

This combo provides continuous stationary attacks that have the capacity to Wound the Behemoth. Though it does not have high damage per hit, the combo is implemented fast and can deal high damage per second.

This combo deals Part-breaking damage to Behemoth parts. It is also composed of moves that build up your Aether bar, allowing you to store ammo and fire booping shots on the Behemoth.

Stab Or Slash Behemoth After Dodge

After you dodge through a Behemoth attack and you're close to it, press either attack buttons to perform a Leaping Stab or Slash. This does a good amount of damage and can start a combo, whether the Piercing Flurry or Aetheric Harvest.

This combo involves converting your Aether bar's charge when it's full into Pike Blast Ammo. Then, when you want to release the ammo, you can press and hold the R1 button then release after you've aimed your shot.

This combo is mainly used for closing the gap between you and the Behemoth. It consumes a lot of stamina so it should be used sparingly or in situations where you have more stamina stored.

Move To Different Part After Wounding

The War Pike specializes in Wounding Behemoth parts. However, it has diminishing returns when it keeps hitting an already Wounded part. After you see a Behemoth being Wounded in an area, move to another one and let your teammates deal more damage to the Wounded part.

Completing the Aether Harvest combo will lock you into the attack animation, making it hard for you to dodge away from incoming Behemoth moves. Use the combo only when the Behemoth is staggered or stationery to complete it.

Many of the War Pike's attacks consume stamina - the Aether Harvest and Leaping Slash. Either use a loadout that supplements with Stamina regen or use your stamina-consuming attacks sparingly so you still have stamina left to dodge away from deadly attacks.

The Pike Blast will always boop the Behemoth if it connects during the right move at the right time. However, it has a wind-up time, making it hard to time your shot. Wait for the Behemoth to gear up for its interruptible attack, place yourself, then let the Pike Blast go.