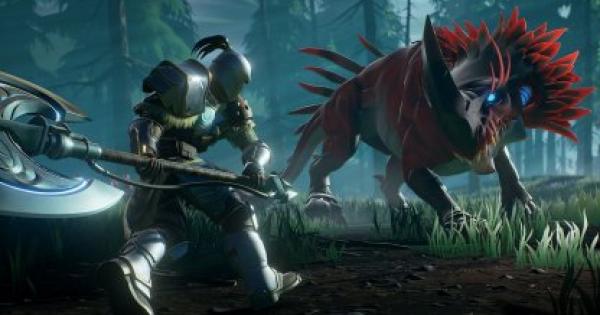 Learn all you need to know in mastering the Axe in this tutorial; including combos, play tips, weapon mechanics, recommended Axe and more!

Despite its slow attack speed, the Axe is a very deadly weapon in the right hands. It can deal massive damage, interrupt or boop Behemoths, and even hit / boop them from afar!

Check Out How To Boop Behemoths!

Most Effective When Charging Attacks

The Axe shines the most when dealing its charged attacks. It has the ability to boop Behemoths, deal bonus damage, and grant you resolve & stacks of determination.

One thing you need to watch out for when using the Axe is your Stamina. You will use up some of your stamina when charging up attacks. Try to balance charging your attacks & evading to avoid running out of stamina!

The Axe has a unique feature that allows it to mix and match different moves into a single unique combo. You can use this to adapt and change your attacks for different situations.

Axe Allows You To Gain Resolve

You gain resolve after immediately letting go of the Vertical attack button as soon as it reaches the third level. Resolve is a Super Armor where you still take damage, but are not staggered by the attacks of Behemoths.

The Axe will also allow you to earn stacks of Determination. Each stack will reward you with a bonus percentage of damage dealt to Behemoths. The amount of bonus damage depends on the number of stacks you have, up to maximum of 3 charges by default.

You will be able to build up the stacks of determination by landing your charged attacks, or hitting Behemoths with your Special attacks. You can check your progress of this via the meter found just below your stamina bar.

Earn A Stack Of Determination By Landing Special Attack

The Stalker's Mercy offers a cell slot for technique type cells, which can be used by Slayers in unique but powerful builds. It's Perk: Wild Frenzy will also give you bonus attack speed to help you land attacks much faster.

The Inferno's Decree is a great Axe for aggressive players. It offers two Power type Cell slots, and deals bonus raw and blaze damage to Behemoths!

The Thundering Scythe is great for dealing bonus stagger damage to Behemoth heads. This is the ideal axe to use if your main job on the hunt is to stagger the Behemoths!

This combo allows you to continuously deal massive amounts of damage to Behemoths at the cost of expending your stamina & remaining stationary. This combo is best used when the Behemoth is not moving around, or when it is interrupted.

Since the first attack of this combo can be held for long amounts of time, you can charge it up and wait for the time to boop the Behemoth. Once it is down, you can follow up with the combos remaining attacks while it is downed.

This combo allows Slayers to deal a bunch of damage to Behemoths while at the same time earning a lot of meter if all of the attacks connect. Keep in mind that this combo uses up a lot of stamina.

This attack will make your Slayer throw your axe at a target, allowing you to deal tons of damage without needing to get in close to the Behemoth. Despite both Specials involve throwing the Axe, there are some differences between the 2 specials.

When thrown, the Axe will keep spinning and deal damage to the Behemoth until it returns to you. You can recall it manually by pressing the same button which allows you to slam the target with it, gain resolve, and potentially boop the target.

Grim Onslaught deals a bigger amount of damage, and can boop targets. After it hits, it bounces back to you, or will land on the ground and need to be picked up. Be careful since it may land somewhere far away if you miss!

Since the Axe is most effective when it is charged up, you may want to equip some Cells that grant you bonus attack speed. This way, you can charge up your axe faster, and deal much more damage in fights!

Learning the attack patterns of Behemoths is essential to the Axe since you are vulnerable when charging up the attacks. Knowing the pattern will allow you to safely position yourself, and correctly time your charged attacks!

Use Horizontal Attacks To Boop Behemoths

The Horizontal combo is perfect for booping Behemoths since it allows you to move around while holding the attack. This will help you orient yourself to boop the Behemoth. Just make sure that you have enough stamina for follow up attacks.

Charge Attacks When Behemoths Are Downed

Attacks Can Be Repositioned Slightly

The Axe's successive attacks can be moved slightly if you need to change the direction of your slashes. This will help you keep the combo going just in case the Behemoth moves around.