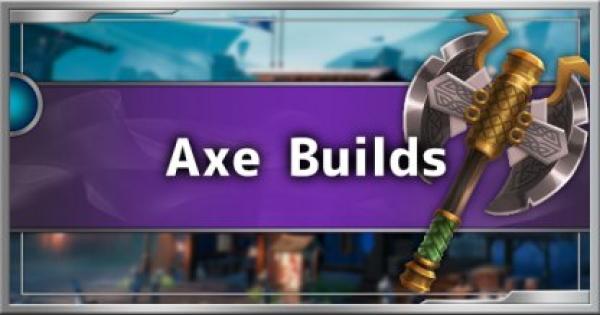 Check out this Dauntless guide on how to build for the weapon - Axe! Includes build guides, overview of each build, & more!

Dish Out As Much Damage As You Can

The Axe is a weapon used by Slayers mainly to deal huge amounts of damage to Behemoths. Learn the Behemoth's moves and patterns, then get into position since Axe attacks are most effective when they are charged!

Despite having a high attack power, the Axe is a slow weapon made even slower due to it's charging mechanic. Builds around the Axe should focus on increasing its attack speed, while also increasing its damage for maximum DPS!

This build focuses on your damage output once your health falls to 50% and below. The Perks that activate once this happens will not only increase your DPS, but will also give you the sustain you need to avoid getting downed!

The Rage perk will give you an additional 25% of damage once you hit 50% health and below. Since the Axe requires you to be in close range with the Behemoths, you can soak up damage fairly quickly to proc the Rage perk.

The Perks Cunning & Ragehunter will each increase your chances of landing a critical strike and damage to enraged Behemoths respectively.

Iceborne Gives You The Sustain You Need

The Iceborne perk significantly reduces the damage you take when you're at half health. It also gives you lifesteal that will heal you up to 50% of your health, meaning that it will always be active provided you do not heal yourself with consumables.

Since the Axe is a slow weapon, Lantern & perks that compensate for its slow attack were equipped. Now charging up your attacks takes less time, and you will be able to hit targets more often!

Your Sharpness and Predator Perks will be the Main perks in this build. Executing Grim Onslaught after 15 seconds while avoiding an attack will greatly increase the amount of damage you do to Behemoth parts!

Get Bonus Damage In Certain Situations

The Overpower and Ragehunter perks will allow you to deal bonus damage to the Behemoth in certain situations such as when it's enraged or when in it is staggered.

Maintain Your Stamina With Conditioning

Since you will be using up your stamina in order to activate the Perks that help you deal part damage in this build, it is best to have a Conditioning perk to give you faster stamina regeneration.

Using your lantern will allow you to deal damage to Behemoth's parts faster. Having the Aetheric Attunement perk charges up your lantern faster for more uses, and if needed, the Conduit perk will increase the attack speed of the whole team!

Maximize Your Damage With The Axe

The Ragehunter, Knockout King, and Overpower perks will grant your axe bonus damage on attacks against the Behemoth in certain situations. You will get bonus damage for staggering attacks, when the Behemoth is staggered, or when it's enraged!

The Tough, & Fortress perks will give you much needed survivability. By increasing your max health, getting a bonus 25% healing from all sources, and gaining a health shield after not being hit, you will be able to go toe-to-toe with Behemoths!

Keep On Using Your Lantern To Increase Attack Speed

I'm extremely curious why in your "beginner/early game" build, the gear bound perks are at +3 which happens at rank 11...