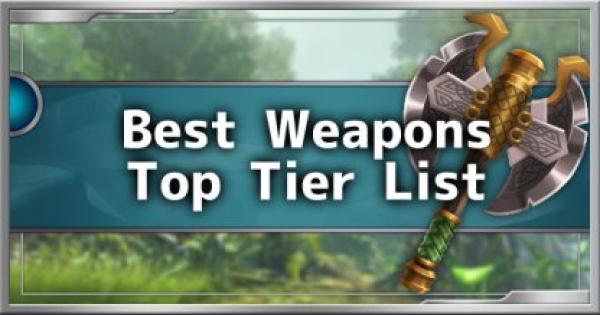 Weapon Ranking Is Based On:

Each weapon in Dauntless has the capacity to deal enough damage to down Behemoths, given they are upgraded accordingly. Weapons with a higher damage output, balanced with attack speed & mobility, are more effective in the game.

Weapons that can be used in both solo play and multiplayer mode are more advantageous in Dauntless. This means Slayers can use the weapon any time, no matter if they're playing alone or with friends.

Weapons are more effective and are ranked higher due to their ease of use, having less complicated combos, and have moderate mastery needed.

A crucial factor in the ranking involves a weapon's ability to boop or interrupt Behemoth attacks. This ensures that the weapon can support the Slayer in both solo or multiplayer mode, creating openings for them to dish out heavy damage to the Behemoth.

The Axe is at the top of the weapons in Dauntless, doing great damage wherever it is placed. It can do a lot of things - boop Behemoths, sever Behemoth parts, and even be used as a throwable in the game.

The Axe can carry a Slayer in both solo mode or multiplayer. It deals enough damage on its own as long as the Slayer can connect shots and is a great damage dealer when playing with several Slayers in a hunt.

The Axe can interrupt enemy attacks by its Heavy attacks or when it's thrown towards Behemoths. It also does slash damage, making it capable of severing Behemoth horns & tails - crucial parts in building your armor & weapon loadouts.

One of the major drawbacks of the Axe is its slow attack speed. It also takes a while to master as charge attacks need knowledge of Behemoth moves & openings for you to land destructive hits.

The Hammer has one of the highest damage outputs in the game. It can boop Behemoths & deal staggering damage, important when playing in multiplayer. However, it cannot sever Behemoth parts and has slow attack speed.

Large Damage Output That Can Stagger

The Hammer has one of the biggest damage outputs per hit in Dauntless. It also has the capacity to do stagger damage on Behemoths - this creates an opening for teammates to dish out even heavier damage together.

The Hammer has slow attack speed in exchange of its high damage per hit. It also doesn't have the capacity to sever Behemoth parts as it mainly deals blunt damage.

The War Pike hits fast and has high DPS. Its ammo shots can boop Behemoth attacks or buff the team, making it flexible to use in solo or team play. Combos are easy to do but consume much stamina and lower mobility due to locking of attack animation.

The War Pike can do very good DPS due to its fast hits. Its piercing attacks also do Wounding damage and its heavy attacks can sever Behemoth parts.

The War Pike can provide great attack opportunities by booping Behemoths with its Pike Blasts. When in team play, it can buff fellow Slayers by using the War Pike's stored ammo as buffs instead.

The War Pike's attacks consume a lot of stamina, making it hard to dodge incoming Behemoth attacks. Combined with the tendency to lock into attack animation, the War Pike makes it hard for Slayers to dodge fast & be mobile around the field.

The Ostian Repeaters deal purely ranged damage that is continuous. It boasts of high survivability due to distance from Behemoth &flexibility due to interchangeable modular parts. It can't boop Behemoths & needs crafting parts to be effective.

The Ostian Repeaters is a unique weapon in Dauntless in that it deals purely ranged damage. This damage is done continuously and with pinpoint accuracy, helping Slayers break down parts needed for crafting.

Repeaters are incredibly flexible without the need to switch builds or loadouts. It has interchangeable modular parts that can swap features in an instant. The only downside is that you need to craft many parts for the Repeaters to be truly effective.

Unless the Repeaters are equipped with a +6 Weighted Strikes Perk, it does not have the capacity to boop Behemoths. This makes it hard to play solo when Behemoths do not provide much room for attacks.

The Sword can deal pretty good slash damage, making it great for multiplayer mode where you can focus on breaking Behemoth parts. However, it is only effective in close-range combat and booping Behemoths is tricky with its slow heavy attacks.

The Sword does its best when fighting against Behemoths in close-range combat. This is complimented by its low consumption of stamina per attack, allowing Slayers to dodge through attacks & continue landing hits on the Behemoth.

The Sword deals mostly slash damage and in high doses, making it a great weapon for targeting and breaking Behemoth parts. It is very effective for Slayers looking farm specific materials in every hunt.

The Sword can interrupt enemy attacks but only through its slow winding heavy attacks. This makes it very challenging and hard to boop Behemoths.

The Chain Blades hits quite fast and makes it easy for Slayers to move around. It is easy to use but has low attack damage per hit and cannot boop Behemoths, making it a support for teams with other harder-hitting weapons.

The Chain Blades hit Behemoths fast and it's easy to move out of attack animations, making it an extremely mobile weapon for Slayers who like repositioning themselves around the Behemoth.

The Chain Blades can deal fast & quick damage to Behemoths but each hit lacks the attack power that most weapons in the game have.

The Chain Blades don't have the capacity to boop Behemoths in Dauntless. They can only interrupt enemy moves when they have the +6 Weighted Strikes Perk applied in the build.