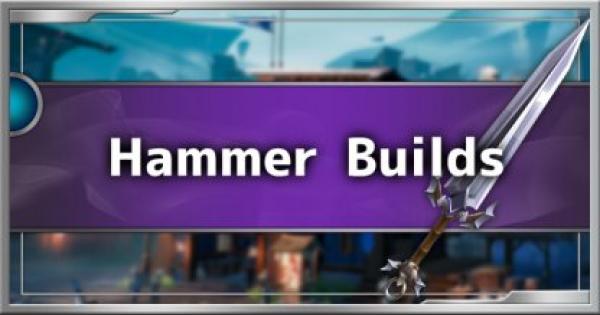 Check out this Dauntless guide on how to build for the weapon - Hammer! Includes build guides, overview of each build, & more!

Builds using the hammer focuses on maximizing the high stagger damage that the hammer can inflict on Behemoths. Your main role as a hammer wielder is to stagger Behemoths and strike their heads!

Due to the Hammer's inherent slow attack speed, builds for the hammer will instead maximize on its best attribute - its high damage via Cells, and active abilities granted by Lanterns.

This build maxes out your stagger damage potential with Knockout King, and maxing out damage on staggered enemies with Overpower.

Since you'll keep Behemoths down most of the time with your stagger, Overpower will maximize the damage you inflict on downed Behemoths!

Predator further increases your damage potential by giving you a buff when you're not hit for 15 seconds.

Your Drask's Eye lantern and Landbreaker buffs will grant damage buffs, making you a damage powerhouse.

Taking your damage boost further is the Impulse Crown weapon mod, that grants bonus damage when you use an Aerial Strike.

This build focuses on improving the hammer's high stagger damage in order to knock down Behemoths with early game gear.

Gear pieces used in this build can be gathered from Behemoths you can face early in the game. The highest having a maximum threat level of 6 (Stormclaw).

As you're starting out, try not to worry so much about which Cells to equip. But if you can, slot in Knockout King, Tough & Nine Lives to improve your stagger damage & survivability.

Makes Use Of Default Weapon Modifications

As with the perks and cells, you don't need to worry yet about weapon mods. The Weighted Crown & Concussive Salvo mods will be enough at this point.

The gear pieces in this build offsets any inherent element weaknesses. The Sight of Stone and Lightning Boots will cancel each other out, while Gnasher pieces have no elemental strengths nor weaknesses.

This build focuses on compensating the hammer's inherent weakness of low attack speed. With Molten, Conduit, and Wild Frenzy, the attack speed is greatly boosted, further amplifying your DPS!

With Knockout King and an amplified attack speed, you'll stagger Behemoths so much faster. Then Overpower amplifies your damage to another level when Behemoths are down!

Because of the hammer's slow attack animations, it is sometimes harder to dodge through attacks as usual. Wild Frenzy & Iceborne turns this weakness to an advantage by giving you buffs at risky low health situations!

Can Be Risky Against Blaze Monsters

Since this uses two Frost armor pieces, you'll receive a bit more damage from Blaze enemies. However, as long as you pick up Molten Heart, you'll have a fighting chance thanks to immunity to On Fire, and increased attack speed.

High Survivability Even At Low Life

This build greatly enhances survivability at low life by taking advantage of low life perks Wild Frenzy, Iceborne, & Rage. These 3 work together in keeping survivability up by giving you lifesteal and enhanced attack speed & damage.

The armor pieces and weapons in this build have an optimized mix of perks and perk slots that can rank each of them up to max +6. Thus, all perks are fully utilized.

One major challenge in creating this build is that this requires parts from Rezakiri and Shrowd, 2 of the hardest Behemoths in the game.

Impact crown? That doesnt exist, do you mean impulse?

How is it possible to write a build with only 300 characters?