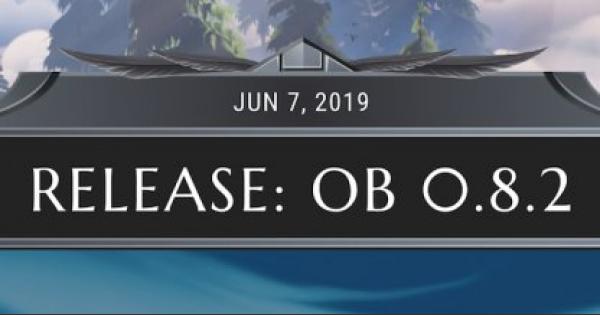 Our latest #Dauntless patch is live! Log out and update now to get:
★ Fixes for several common crashes
★ A new dye region & "dye all" option
★ In-game bug reporting
★ Improved performance

Slayers now have access to a third dye region on nearly all armours, and can use up to three dyes to customize each piece. Overall dye-able surface area has increased as well. Plus: You can now dye all of your equipped armour at once!

Slayers can now report bugs through the in-game Help submenu. Go to the Main Menu, select Help, and choose Report a Bug to gain access to the form.

Behemoth strengths and weaknesses are now viewable from the hunt board. This should help Slayers better plan and prepare for hunts.

* Following has been quoted from the official 0.8.2 patch note.

・Improved performance for Charrogg, Hellion, Valomyr, and Rezakiri. Before you ask: This is not the “final” performance improvement for these Behemoths.

・Made multiple optimizations to VFX and Behemoths to make them less resource-intensive. This should lead to improved performance on hunts.

・Added a shimmer to “invisible” Kharabaks. They should now be a little easier to see when enraged.

・Introduced fixes for the most common crashes that players were running into on all platforms.

・Fixed a bug where changing your lantern on the airship could cause its UI to disappear during the following hunt.

・The Middleman will now show the correct price for (a) unlocking new cell slots and (b) speeding up cooks.

・Fixed a bug where Slayers could get stuck in the Hunt Pass screen.

・Fixed a bug where some Slayers could see and craft the previous (pre-0.8.0) versions of Moonreaver Shrike weapons.

・Using Aetherslam will no longer execute the hammer’s standing blast or incorrectly place a single-ammo Landbreaker.

・Slayers who have their system language set to Polish should no longer experience Dauntless in Portuguese. It will now be in English.

・Fixed a bug where some TVs would clip the top corners of the HUD depending on overscan settings. (You should now be able to see your compass.)

・Fixed a bug where opening the Move List on the airship could cause it get stuck, remaining on the screen for the duration of the hunt.

・Fixed a bug where using a keyboard to navigate the store could result in the wrong item being selected.

・The Sylvan Barrel Mastery card will now display the correct icon and background.

・Interrupt indicators will now correctly display any time a Behemoth is in an interruptible state on all platforms.

・Fixed a bug where VFX could end prematurely and abruptly.

・Fixed a bug where Slayers could go invisible when browsing certain menus.

・Fixed a bug where the End of Hunt survey could get cut off if the player was mid-answer.

・Raised Razorwing Kharabak’s health to its intended level. I feel my power returning …

・Fixed a bug where the Armour Crafting screen would show an incorrect resistance rating for armour level +11 and up.

・Added the ability for Slayers to customize their appearance from the Personality menu. But you can still make Gregario happy by visiting his mirror.

・Fixed a bug that caused the camera to reset into the sky when exiting the Hunt Pass screen.

・Fixed a bug that caused beards to show through certain helmets in the Loadout, Personality, and Store screens.

・War Pike users may get stuck in the Piercing Fury combo finisher.