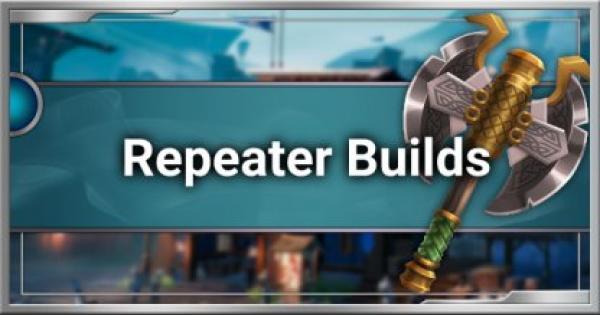 Check out this Dauntless guide on how to build for the ranged gun weapon - Ostian Repeaters! Includes build guides, overview of each build, & more!

Swap Out Elemental Barrels According To Your Target

Repeater is an unique modular weapon, having the ability to swap out its elements with ease without messing with your builds. Prioritize preparing all elements when using the Repeater, and swap them around according to your target's weakness.

Focus on High Rate of Fire

Key to making the most out of the Repeaters will depend on how fast you can empty your clip on your target while keeping your buff active as often as possible. Using Perks such as Wild Frenzy and Conduit will greatly increase your overall DPS!

Unlike other melee weapons, the Repeater holds multiple unique traits which requires you to focus on your positioning with your target. Not knowing these crucial traits will severely hinder your weapon's capabilities, so be sure you know them all!

Use Your Reticle to Check Optimal Combat Range

Although being a ranged weapon, the Repeaters will drastically lose its damage the longer you are away from your target. Always try to position yourself close-mid range from your target. When your reticle is colored red, you're in optimal range for maximum damage.

Utilize Empowered Reload As Often As You Can

Repeater also allows you to siphon ether from Behemoths, and boost your damage / Rate of Fire while greatly empowering your Grip & Chamber Abilities. In order to Empower Reload, simply close in on your target to melee range and reload your Repeater. When done properly, you will see white energy being absorbed into your gun and indicator light up on the left hand corner.

Your Repeater shells will inherently deal Slash physical damage, allowing you to slice off tails and horns off Behemoths. Use your pinpoint accuracy to focus your damage on a part to help sever them off!

The Ostian Repeaters are one of the two weapons in Dauntless that are unable to boop or interrupt a Behemoth's attack. You need to have a +6 Weighted Strikes Perk active for you to be able to boop a Behemoth.

This build centers around Iceborne's synergy with Rage and Wild Frenzy; acquiring high damage resilience and burst damage output at the same time, while complementing those buffs with other gears to pump out as much bullets as possible.

HP Needs to Be Below 50% to Trigger Buffs

In order for you to achieve peak performance in this build, you will first have to be below 50% health to trigger the buffs. Although this may seem risky on paper, your Iceborne damage mitigation and life leech will keep you up in peak condition as long as you consistently damage your target.

The empowered Captain's Grip will provide rate of fire buffs to your entire team, and the Searing Prism will provide bonus 250 damage every 10 shots, thus boosting your damage potential even further.

The Lucky Magazine mod will provide up to +24% crit chance when your magazine is empty. This will drastically change how you use your Chamber Ability, namely the Full-Bore Chamber. Emptying your clip and unleashing an Full-Bore shot through an enemy can often deal massive damage adding up to over several thousand damage.

Use Lantern Hold & Instant Ability As Often As Possible

Thanks to the high rate of fire, Full-Bore Chamber, and Aetheric Attunement Perk, you will consistently be able to use your Lantern Ability every 1-2 clips. Use your hold ability to dish extra damage and buff your rate of fire even further, and apply damage buff with the instant ability.

This build utilizes the Molten's buff drops to supercharge your rate of fire while upping your movement speed; making it easier to reposition and evade enemy attacks. Using this in conjunction with Predator's damage buff and Cunning's crit chance buff can maximize the potential damage output exponentially.

This build focuses heavily on the player's positioning to keep themselves out of harms way to ensue maximum damage. While maneuverable, this build is highly susceptible to damage (especially Frost attacks), which can easily ruin your run. It is highly recommended that you use this build after learning the Behemoth's attack patterns.

Captain's Grip Can be Interchanged to Saboteur's Grip

While providing juicy RoF boost, you can choose to swap this out with Saboteur's Grip instead when there are other Repeater user in your party which uses Captain's Grip.

While powerful on its own, the Full-Bore Chamber's ability can be further boosted in compilation with the Lucky Magazine mod by firing the shot on an empty magazine. Try to position yourself directly in front or at the back of Behemoth so that your shot may penetrate through as much body parts as it can.

Along with Bladestorm's Part damage buffs, the Extraction Catalyst Mod allows you to keep your ability downtime to minimum. It is encouraged that you try to dodge enemy attacks to keep your burst damage up as often as possible.

Lanterns Interchangeable Depending on Preference

Due to the nature of that this build, requires you to stay in closer range than other builds, you may choose to use other close range oriented Lanterns such as Skarn's Defiance, or Embermane's Rapture for higher RoF depending on preference.

repeater build i've been using for some time now, as a new player, i found on another website:
https://gamerdiscovery.com/best-dauntless-repeater-support-build/
it's very fun and easily obtainable as a new player.