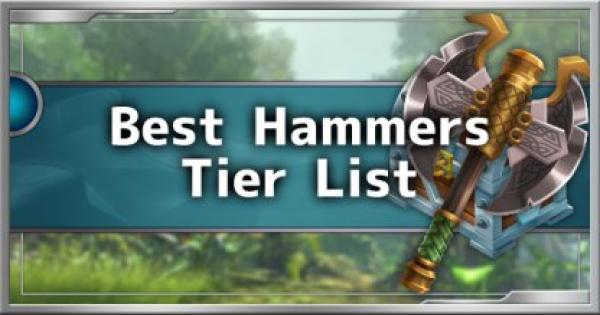 Read this Dauntless guide & tier list to know which are the best Hammers in the game. Find out the top ranking hammer to use and more!

These weapons were chosen and ranked according to their usability & effectiveness in hunting Behemoths in Dauntless, including ease of use, skill required, and end game viability. Each weapon's unique capabilities were also taken into consideration when they were chosen.

Has Built-in Knockout King for Staggering

Skarn's Vengeance has +3 Knockout King which increases your Stagger damage - one of the most important uses of the Hammer.

It also has a power slot, allowing you to +6 your Knockout King or add another useful power Cell.

Generates A Shield Based on Damage

It's inherent unique perk generates a stackable shield based on the damage you shield. Since hammers deal a lot of damage, you can generate a very durable shield!

For Slayers who want to go all-out damage, Inferno's Burden is a must-have Hammer. It has 2 power slots, so you can max out power Cells instantly.

It also has Overpower, increasing your damage to staggered Behemoths, which works well with your the hammer's ability to stagger and knock Behemoths down!

Has Increased Damage on Behemoth Heads

The Break of Dawn has a built in Cunning perk, giving you a chance to deal double damage, further increasing the hammer's inherently high damage!

It also has the unique ability to add a 10% chance for your attacks to hit twice, which can potentially quadruple your damage output with Cunning!

This hammer works great with low life builds, as it adds +50% damage when below 20% health, greatly improving damage output.

It also has a built-in Cunning perk which grants you a chance to double your strike's damage!

When firing the Molten Edict, instead of a close range blast, you will instead lob a long range fireball towards a Behemoth, causing damage at range and inflicting blaze damage over time!

Check Out How To Unlock Exotic Weapons & Armor Here!

Leave Behind A Blaze Grenade

When performing an Evasive Blast or Double Jump, you leave behind a bouncing and homing Blaze grenade, that explodes upon contact with a Behemoth.

Use The Charrogg's Rolling Lava Orb

Using the Molten Edict grants you the ability to use the Charrogg's lava orb, which procs after executing a full combo followed by an elemental blast.