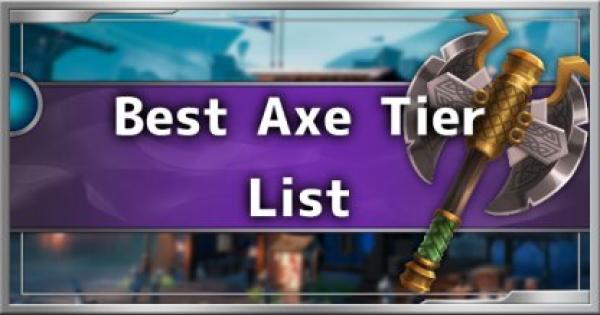 Check out the top 5 Axes to use in Dauntless! Find out the best axes to use to defeat Behemoths in this tier list and guide!

These weapons were chosen and ranked according to their usability & effectiveness in hunting Behemoths. This includes ease of use, skill required, and end game viability. Each weapon's unique capabilities were also taken into consideration when they were chosen.

Check Out The Stalker's Mercy Here!

The Stalker's Mercy is the only Axe in the game to offer a Technique Cell Slot which allows you to put in Cells that increase attack speed, which is very important for the Axe.

The Stalker's Mercy's unique ability generates a Shadow Orb which grants an extra 1.5% of damage as long as you keep hitting your target. When there are 5 or more orbs present, the bonus effect doubles.

Check Out The Inferno's Decree Here!

The Inferno's Decree Axe offers Slayers two Power Cell Slots on top of the Overpower Perk built into it. This Axe is perfect for Slayers who want to go all out and deal as much damage as they can.

Landing the sixth hit in quick succession will deal a flat amount of bonus damage and major blaze damage to the target. This is especially effective when going against Frost Behemoths.

Check Out The Thundering Scythe Here!

The Thundering Scythe shines the brightest when it is being used against Behemoth heads. Since it deals 20% more damage to that part, it is much easier to stagger the Behemoth!

The Thundering Scythe's Perk increases the Lantern Charge rate based on your attacks. If you keep landing your attacks, you will be able to use your lantern more often to help out the team in the fight!

The Edge of Dawn has a small chance to hit twice when you land an attack. This will increase your damage output if it triggers often.

This particular Axe's Perk gives you a chance to land critical hits when attacking Behemoths! Coupling this with the Axe's ability to hit twice greatly increases your damage output in fights!

After not dealing damage for a few seconds, your next two attacks deal 25% increased damage. Since the Axe takes time to land hits, good portion of your attacks will deal a bonus percentage of damage!

With the Sharpened Perk that increases your part damage by 15%, you can quickly deal tons of damage and break parts with ease!