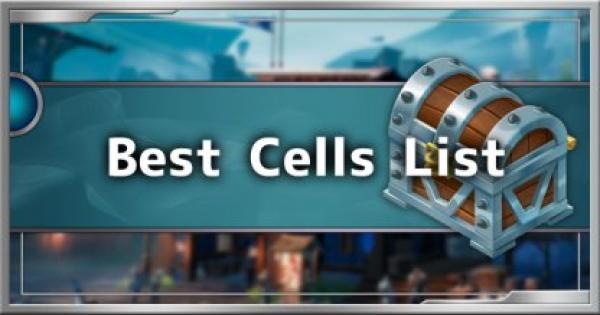 Read this Dauntless cells guide to know which are the best cells in the game worth keeping. Find out the best cells per type & more in this tier list, and learn which cells to sell to the Middleman!

These cells were chosen and ranked according to their usability, versatility and effectiveness in creating the best builds in the game.

Check Out How To Farm Cells Fast Here!

Cells Are Grouped Into 5 Categories

Each cell is classified under a specific category, whether it's Defense, Power, Mobility, Technique & Utility. Each weapon and armor piece carries a specific type of cell slot, which specifies the kind of cell you can only equip. This list follows that same grouping.

Iceborne is the core of Lifesteal builds as this allows you to decrease damage received at below 50% health, while granting you a bit of lifesteal at rank +4 onwards.

Increases max health and increases healing received from all sources. This works well with the Iceborne perk as lifesteal is considered a healing source. This also increases your health pool, allowing you to go for risky builds that require you to go below 50% health.

Grants you a chance to halve incoming damage, and at later ranks, you will stay up when knocked down. This cell is great for survival builds, and can be useful in later levels when enemies hit harder.

Overpower adds the highest percentage increase of all Power cells at 70% increased damage against Behemoths at +6. Since there's almost always a stagger opportunity, this cell is great for damage focused builds.

Ragehunter adds additional damage when attacking enraged Behemoths. This is quite useful for almost all Behemoths, except for Behemoths like Riftstalker with quick enraged states.

Rage is one of the pillars of Iceborne lifesteal builds, as it improves your damage when low in health. At higher ranks, you'll only need to drop to 50% health to trigger rage.

Conditioning speeds up your Stamina regeneration, which is valuable for builds utilizing stamina-dependent weapons like Chain Blades & Swords.

Agility reduces the cost of dodging, and allows you to dodge more. This works well for builds that have gives you buffs for dodging or avoiding damage like Evasive Fury, Knockout King, Fortress etc.

Similar to Tough, this cell increases your stamina pool up to 100. For Stamina dependent combos and weapons, this will allow you to sustain those moves and attacks much longer.

This cell grants you a chance to do double damage on an enemy. Though a small percent chance, this works well for high attack speed builds and weapons like Chain Blades and War Pikes.

Molten gives you the ability to drop Molten Hearts which boosts both your attack and movement speed, as well as immunity to burning, making this a must have for attack speed builds.

Part of the core perks that make up high risk builds (e.g. Iceborne, Rage), Wild Frenzy boosts your attack speed up to 25% when below 50% health.

This cell grants an attack speed buff to all Slayers when you use your Lantern Hold ability. This is great for attack speed and DPS builds, and works well with Aetheric Attunement for to charge it up fast!

This cell basically reduces the cooldown of your Lantern Hold ability by charging it faster, which synergizes well with Conduit. This works best for hard hitting weapons like the Axe and Hammer since the charge depends on the amount of damage dealt.

This improves the charge rate of weapons, which is perfect for the War Pikes, Swords & Axe which are dependent on weapon charge abilities.

Thanks and best regards