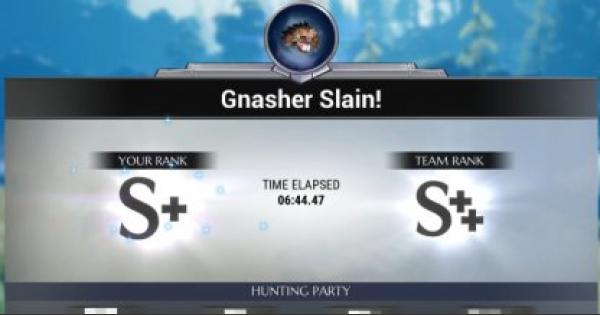 Dauntless
Ranking System Guide - How To Get S++ Rank

Check out this Dauntless guide to learn about the game's Ranking System. Including how to get S++ Rank, hunt rank factors, and more!

What Is The Hunt Ranking System?

In Dauntless, Slayers and their teams are given rankings after they complete a hunt. This determines how well or how poorly they did while hunting and involves factors such as damage given or taken, how many times downed, and etc.

There are 8 levels in the Dauntless ranking system. From lowest to highest - E, D, C, B, A, S, S+, & S++. These are the different levels you'll see after defeat a Behemoth in a hunt.

The main factors of the hunt ranking system is the damage you make on a Behemoth and the speed in completing the hunt. The more damage you deal and the faster you defeat the Behemoth, the higher your rank in the end.

When you take a lot of damage, and are downed many times, there's a larger chance of you getting a lower ranking. This can also affect your team's ranksince it'll take longer to down the Behemoth if they're too focused on reviving fallen Slayers.

Higher Rank Can Give Better Rewards

Slayers get bonus rewards when they perform better in hunts. So the higher their ranking, the bigger chance of getting better rewards. For example, having close to no knock-outs in the hunt can provide you with bonus loot rewards.

The highest rank you can get in Dauntless is S++. This means you've performed outrageously well in the hunt - dealing a high amount of damage while not taking any and completing the hunt in a timely manner.

One of the best ways to get S++ rank is to just keep dealing damage to the Behemoth. Try to out-damage your teammates and just keep hitting the Behemoth as hard as you can.

Interrupting Behemoth attacks and breaking its parts will also help count towards getting S++ rank. Doing these actions still deal damage and will increase your chance of getting a higher ranking.

Defeating a Behemoth as fast as you can will also lead to a higher ranking, not only for yourself but for your team as well. Elongating hunts will raise Behemoth danger levels, making it harder to defeat so it's best to down it quickly.

Another factor that will raise your rank is dodging through attacks and avoiding taking damage. This way, you'll continuously deal more damage to the Behemoth without taking any.

Avoid Getting Downed During Hunts

Part of avoiding taking damage is avoiding being downed during the hunt. This lowers your rank significantly so it's best to mind your health and heal up to avoid getting knocked down by Behemoth attacks.