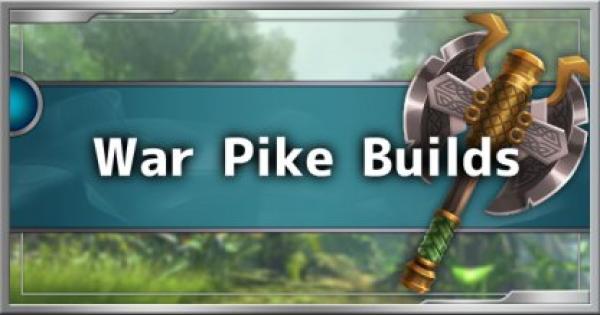 Check out this Dauntless guide on how to build for the weapon - War Pike! Includes build guides, overview of each build, & more!

The War Pike has very high damage-per-second as it can attack very fast. It can also wound Behemoth parts easily with its light attacks, making it a valuable weapon to have for Slayers looking to down Behemoths fast.

Has Low Mobility With Stationary Attacks

The War Pike has low mobility due to its attacks having long animations that lock you into place. This leaves you vulnerable to Behemoth attacks so self-control and knowledge of attack combos is a must.

This build focuses on emphasizing the War Pike's speed & high DPS - supplementing it with buffs that will make it more powerful. Evasive Fury, Ragehunter, Savagery, and Sharpened all buff up its different attack types & attack speed to make it more effective.

This build will allow you to do more damage to Wounded parts via Savagery. You'll also hit an enraged Behemoth harder with Ragehunter while Sharpened allows you to inflict bigger Part damage after dodging a Behemoth attack.

Dodging through a Behemoth attack will activate Evasive Fury. This will increase your attack speed for a couple of seconds, allowing you to hit the Behemoths more in a shorter span of time.

With the Drask's Eye, you'll gain more attack power for 6 seconds when the tap ability is activated. Complemented with the Aetheric Attunement in this build, you'll be able to charge your Lantern much faster & use this buff sooner.

This War Pike build takes the weapon's high damage & attack speed to the next level. It focuses on heavily increasing the War Pike's damage-dealing capabilities while pushing its attack speed even further for faster hunts.

Buff Up Attack Damage With Perks

Adrenaline, Overpower, Predator, and Ragehunter all work together to massively buff up and increase the attack damage you can do to Behemoths. This combination allows you to down the Behemoth faster, keeping threat levels low.

The combination of the Embermane's Rapture and Conduit Perk will increase your attack speed further during the hunt. Having Aetheric Attunement will decrease lantern's charging time, allowing you to use it more often while hunting.

The God Hand is able to channel an unique beam attack that does increasing damage as it continues to hit its target. This build focuses on buffing up damage of that beam and regular attack to wounded parts, and deal devastating single-point damages to Behemoths' parts.

In this build, you'll utilize Overpower, Ragehunter and Savagery - all of which add buffs would damage to the part, while making sure that the part can sustain maximum Wound damage / status without breaking thanks to the Acidic perk.

The Drask's Eye increases your damage for 6 seconds when its tap ability is activated. Combined with Aetheric Attunement, you'll be able use this Lantern ability often in the thick of the hunt.

This War Pike build focuses on compensating for the Slayer's extreme use of Stamina for its heavy attacks & dodging. It also pushes increased attack speed, enlarging opportunity to Wound Behemoths & greatly damage them.

The +6 Conditioning in this build will greatly increase your Stamina regeneration, allowing you to do heavy attacks more or not lose stamina when you need to dodge.

Predator, Conduit, and Wild Frenzy all increase your attack speed. This complements the Wounding damage of the build, making it easier & faster for you to Wound the monster.