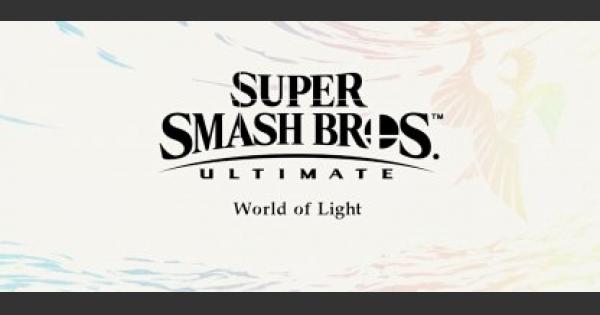 Check out this Super Smash Brothers Ultimate guide on the World of Light or Adventure mode. Learn more about spirit battles, boss fights, tips to beat this mode, and getting different endings!

What Is World Of Light?

In World of Light, player have to participate in "spirit battles" and boss fights to move unlock new spirits, fighters, and paths in the map to move forward in the story.

Spirit Battles in World of Light

Spirit Battles are scattered throughout the World of Light map. Players have to defeat fighters with unique traits & requirements called "Puppet Fighters" to unlock new spirits, fighters, and open up new paths in the map.

Boss Fights in World of Light

Boss Fights in World Of Light need to be completed for players to move forward in the map and continue with the story. These bosses range from famous baddies from other franchises such as Count Dracula from Castlevania series, and will be unique unlike any other battle against regular characters.

World Of Light Spans to Light Side / Dark Side Map

World of Light has multiple endings according to which variation of spirits you have freed during your journey.

By defeating a series of spirits through the 1st half of your adventure, you will be able to challenge Galeem, the entity of light, as the final boss. Upon defeating Galeem, your world will be completely engulfed by the power of Dharkon, the entity of Darkness.

World Of Light - Light Side Walkthrough

Challenging Dharkon, the entity of Darkness, will require you to complete the 2nd half of your journey in World of Darkness. Upon defeating Dharkon, Galeem will eradicate all darkness in the land... and everything else along with it, including yourself.

World Of Light - Dark Side Walkthrough

To get the true ending of World of Light, players must defeat both Galeem & Dharkon, and confront the two entities to keep balance between two worlds. Upon ultimately defeating them in a final showdown, you will be greeted with a final true ending.

Tips To Beat World Of Light

Find Your Preferred Characters on Map to Unlock

It's best to unlock your preferred fighters first! Look for special character icons from the map and aim to compete them to use them throughout the World of Light map.

In the first crossroad in World of Light, you get to unlock one of 3 characters - Marth, Sheik, or Villager. Choose the one that fits how you want to play this mode the most!

Check Out Who To Pick In World Of Light!

Unlocked Characters Can Be Used In Other Modes

Equip Spirits To Assist In Battle

Spirits in World of Light provide your fighter with buffs - raising their attack and defense statistics, adding unique effects to their attacks and more! Collect the spirits and build your own unique Spirit loadouts!

Level Up Spirits To Make Them More Effective

The more you use a certain Spirit, the more experience they'll gain and the better their stat boosts. Unlock Spirits with good boosts first and keep using them in Spirit Battles to make them stronger! You may also level them up with Snacks acquired from other modes and shops.

Check Out How To Level & Evolve Spirits!

Most of the time, Spirit Battles block paths in the World of Light Map. Defeating them will open up new areas & roads for your Fighter to traverse on. Keep an eye open for "!" marks on map!

All Character Unlock Location in World of Light