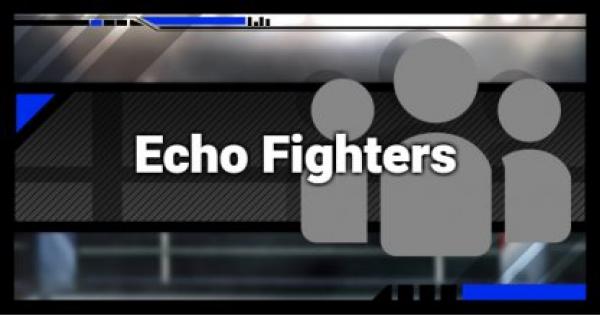 Read this Super Smash Bros. Ultimate guide and list on Echo Fighters! Find out which Fighters are Echo Fighters, the differences between them, & more!

What Are Echo Fighters?

Fighters That Are Almost Clones Of Other Fighters

Echo Fighters are almost the same as their original Fighter but have distinct differences that don't make them valid as a simple re-skin.

Echo Fighters have some differences with their originals - in appearances and certain traits of their moves. Dark Pit, for example, has higher attack & burst damage than original Pit when using a side special attack.

Lucina is the Echo Fighter of Marth from the series Fire Emblem. Lucina was known to have disguised herself as Marth, the main protagonist of the first Fire Emblem.

Lucina & Marth's Damage Points on their Swords Are Different

Both utilizing similar move sets, Marth has a slight damage difference when hitting enemies with the tip and closer end of his sword. Lucina's damage output on her sword is evenly distributed no matter where her sword hits.

Dark Pit was created by the Mirror of Truth in Kid Icarus: Uprising. He is the exact copy of Pit from their appearance to their abilities. The only difference they have is in their personalities.

Dark Pit's Silver Bow deals more damage and knockback than Pit's Palutena Bow, however it does not fly as far. Pit also has Upperdash Arm while Dark Pit has the move Electroshock Arm.

Princess Daisy is the Echo Fighter of Princess Peach. She is the princess of Sarasaland, the main setting debuting in Super Mario Land for the Game Boy.

Daisy & Peach Are Almost Identical Aside From Visual Changes

Daisy and Peach are almost identical in their performance aside from visual changes. Daisy's Daisy Blossom summons flowers of her namesake while Peach's Peach Blossom brings out peaches.

Richter Belmont is known as the descendant and Echo Fighter of Simon Belmont, the legendary Vampire Slayer from the Castlevania series.

Richter is Faster than Simon

Playing as Richter, you may notice that he moves slightly faster than Simon. Other than that, there's not much difference between the two when it comes to moves.

First appearing in Fire Emblem Awakening as Father of Lucina, Chrom is an Echo Fighter of Roy hailing from the same Fire Emblem franchise.

Compared to Roy, Chrom has a different Final Smash, the "Awakening Aether", and uses his sword in a different style.

Where the original Samus uses her Morph Ball form when dodging, Dark Samus will have a different slithering motion to dodge enemy attacks on ground and jumping.

Hailing from the Street Fighter series, Ken is an Echo Fighter known as the eternal rival of Ryu, the poster-boy of the franchise.

Compared to Ryu, Ken Shoryuken will have flaming effect, and his Tatsumaki Senpukyaku will multi-hit the target. Ken's movement speed is also slightly faster than that of Ryu.

Chrom also has a totally different up b. And Roy does more damage towards the hilt of his sword (opposite of marth). Additionally, Roy’s side b sets characters on fire, so it detonated explosives and stops red pikmin for example.