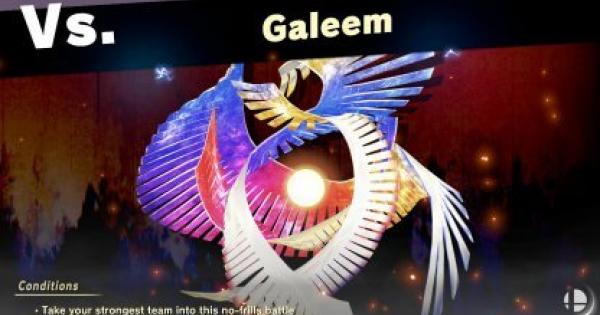 Check Out The World Of Light Summary

The first crossroad will make you choose between three different characters to unlock. You can choose between Marth, Sheik and Villager. Each path has its own advantages and disadvantages so choose wisely!

Which Character to Choose in Crossroad Paths

Marth's stats are very well-balanced. He is an easy character to master and will be helpful when fighting Spirits.

Sheik is a fast and agile character. However despite her quickness and long range moveset, she is a bit harder to master. Opting to go through her path may take a bit longer, but will unlock lots of characters for you!

The Villager is a very tricky character to master since you need to get up close and personal with enemies to deal big damage. However, Villagers path offers the fastest route to beating Galeem!

Activate The "!" Button Near The River

Remember to activate the "!" Button past the yoshi island area. It is next to the river with a strong current. This will take down one of the barriers to the Temple of Light.

Kirby has a lot of moves that let him dish out damage fairly quickly. You can bring down Giga Bowser's health when he shows gaps in his attacks. Kirby's down special also turns him invulnerable to damage for a while!

Giga Bowser Does Not Flinch Due To Heavy Armor

When fighting Giga Bowser, don't think that you can knock him off his feet! He has armor that doesn't make him flinch when being attacked! Your best bet is to go in, get a few good hits, and back away!

Use Your Speed To Dodge His Attacks

Giga Bowser is strong, but is also slow and telegraphs his attacks. Go near him to get a few hits, and when he starts his attack animation move away for a bit until it is safe to go back in.

As you will need to reduce Giga Bowser's life bar to 0, you can equip Spirits that will increase your damage. Recommended Spirits are "Boom Boom & Pom Pom" and "Spring Man".

Remember To Push "!" Button In the Lake

This will take down the second barrier blocking you from entering the Temple of Light. It can be found on the heart shaped lake.

He can open the barrier blocking your entrance to the base. He is found in the area just Northwest of the first Crossroad.

Having the Kapp'n Spirit will make your travels easier around the map. His fast travel only follows a specific route, but will help you get around faster when trying to finish the game quickly.

This button will disengage the last barrier blocking the Temple of Light. It is on the Eastern Side Of The Forest.

You will need to get the Spirit Rob 64 in the base to proceed further in the game. He will be able to repair a plane that you will need to reach Galeem. Rob 64 can be found in the room with lots of monitors.

7. Defeat Galleom In Base - Hints

Mario can do lots of damage and has quick reflexes to avoid most of Galleom's attacks. He is a great choice to use when fighting against Galleom, but any fast fighter will do as well!

Stay Close To Galleom When He Shoots Missiles

Galleom will try to hit you with his missiles. However, the rockets will not be able to hit you if you stay near him. You will also be able to get a few good hits in him while he is doing this.

Stay Away From Galleom's Spin Attack

If you are near Galleom when he starts his spin attack, then get away as soon as you can! His spin attack can pull you near him, and can deal massive damage!

Galleom Hints His Next Attack

Galleom telegraphs his attacks to you. Since he is also a slow fighter, you can check his movements, and see which attack he is going to perform. From there, you can move out of the way just before he tries to hit you!

Head to Temple of Light

Head to Temple of Light - Walkthrough

After reaching the Temple of Light and defeating Simon, a new Warp Zone will appear allowing you to proceed further.

You will be able to fight Pit in the furthest reach of the Temple of Light. Defeating him will dissipate the barrier, allowing you to move further on the East side of the world map.

The Spirit "Kapp'n" is needed for you to ride the bus. The bus can be located in the area just South of the snowy mountains, while Kapp'n can be found in the Nintendo area.

In order for you to face Rathalos, you need to find a way to get to the island on the Southeast side of the map. Lapras can be found just South of the Pac-Man area, and will allow you to ride on it to traverse water!

Since Rathalos will be raining down lots of fireballs at you, it would be best to get someone who can get out of the way as quickly as possible to avoid damage. Candidates include Sheik, Captain Falcon, or Little Mac!

Rathalos's Roar Can Disorient You

Don't get too close when Rathalos roars. It can cause you to get dizzy, preventing you from moving around! Alternatively you can shield yourself from the roar with your shield!

Move Away From The Fireballs

The Fireballs that Rathalos unleashes on you starts to grow once it hits the ground. Don't immediately go near the point of impact as it can still catch and damage you for a few seconds!

Throw Items At Rathalos To Dizzy It

Periodically, items will spawn on the ground. Pick up these items and throw them at Rathalos' face to disorient him. This will leave him in a dizzied state, allowing you to go close and get a few good hits in!

ROB 64 will be able to fix the Great Fox for you to ride it into space. If you haven't gotten ROB 64 yet, the Spirit can be found in the base where you fought Galleom.

Stick To The Ground As Much As Possible

The Master Hand has slow attacks, allowing you to hit him a few times before it hits back. However, the Hand's attacks can easily launch you out of the stage. Keep close to the ground when attacking to avoid getting tossed outside!

Mario's balanced moveset is helpful when chipping away at Galeem's health. His size also allows him to get through the different "patterns" that Galeem damages you with!

Move To Open Spaces Away From The Lasers

The lines that fill the screen are lasers that will deal damage to you once Galeem activates it! When these lines show up, head to an empty space to avoid getting damaged!

The Bombs Are Destroyable

When Galeem summons bombs, there is quite some time before they detonate. Instead of looking for a safe space, you can create some breathing room by destroying the bombs.

Splitting Into 3 Means He Will Shoot At You

When the ball of Galeem separates into three, he will start shooting waves of balls at you. Keep moving around the stage to avoid getting cornered by the projectiles!

Galeem will be throwing a lot of obstacles to damage you. You will be able to avoid them, but it will reduce the amount of damage you do to Galeem before you back away. Be patient and chip away at Galeem's health!

All Character Unlock Location in World of Light

World of Light - Unlock Location in Light Side