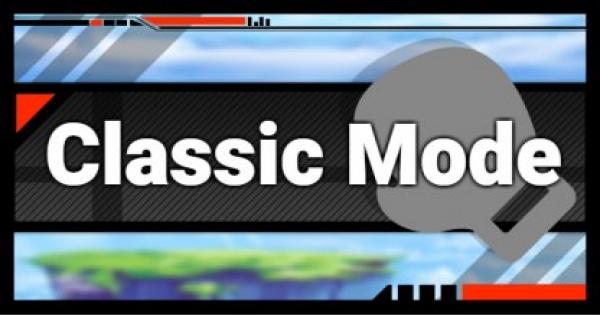 What is Classic Mode?

In Classic Mode, each fighter in the roster will have their own predetermined path. This means that each of them has their own set of fighters and stages.

Paths Relate To The Fighters

A Fighter's path will closely relate to the character's history. For example, Pikachu's path "I choose you" will make him go up against other pokemon in the roster.

Can Be Played Solo Or With A Friend

Choose Your Difficulty By Adjusting The Mural

Before getting into the match, you will be able to choose the difficulty or "intensity" by moving left and right through the mural. The left part of the mural will be easier, while the right part will get harder!

Move Up the Mural With Nice Plays!

If you did well on your previous matches, you will get to go up the mural! Having a more high intensity by the end of the game mode will give you more rewards!

There are different stages depending on the character's path.

Straight up smash battle against other fighters. Your opponents will closely resemble characters from your chosen fighter's history!

The enemies just keep on coming! In Horde Battles, you will need to be quick on your feet, and faster with your reactions since you will be fighting against a mob trying to KO you! Enemies in this mode are easier to launch.

There are times when you will come face to face with opponents that have been changed up a bit! These can range from tiny & giant enemies, metal enemies, a team of enemies and more! Adjust your strategy accordingly!

2 or 3 enemies are out to get you! Unlike Horde Battles, these types of stages do not spawn new characters for you to fight. However, enemies take normal damage and some effort to launch!

You will also get to face different bosses at the end of your path! Bosses include Ganondorf, Master Hand, Rathalos, and more!

What Happens When You Lose?

If you lose you will be given the option to pay up some points to continue. If you do, you will move down the mural to lower intensity, and you will respawn. Alternatively, you can use a ticket respawn without lowering intensity.

After beating Classic Mode, depending on which character you chose to finish it, you will be challenged by a new fighter! You will then get the chance to unlock this fighter by defeating them in a 1 Stock match!

NOTE: This is only applicable if there are still characters that you have not unlocked.