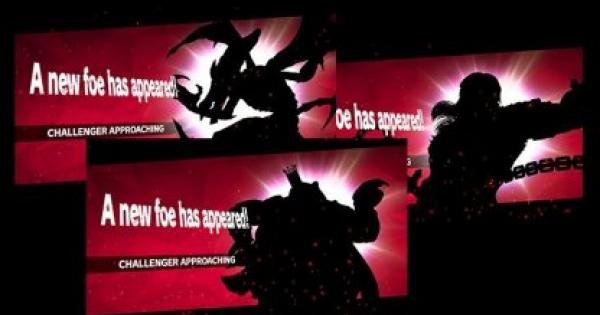 Super Smash Bros Ultimate | SSBU
How to Unlock All Characters

Check out all playable characters in Super Smash Bros. Ultimate in this comprehensible chart, including first appearances, debut titles, and character rating in SSBU & more!

How Do You Unlock New Characters?

Who Are Unlockable Characters?

Unlockable characters are additional playable character added to your roster once completing specific requirements. When playing Super Smash Bros. Ultimate for the first time, you will only have access to 8 characters: Mario, Donkey Kong, Link, Samus, Yoshi, Kirby, Fox and Pikachu.

Additional playable characters can be unlocked to your roster by either "Playing on SSBU for 10 minutes in any game mode", "Progressing in World of Light", or "Progressing in Classic Mode".

Fastest Method To Unlock All Characters

Play Any Game Mode for 10 Minutes

Play in any SSBU game mode for 10 minutes or above to have your first challenger, "Ness" from the Earthbound series to appear.

The first timed unlock, Ness will require you to actually play the game for 10 minutes or more. Any following character will challenge you depending on how long the time has passed since the last Challenger appeared.

Check Out How To Unlock Characters Fast

Repeat Process To Get Additional Challengers

After unlocking your first character, you will be automatically challenged by a random unlockable character every 10 minutes. Repeat this process to unlock all characters in the roster.

The Smash game mode will allow you to calibrate your game rules from stages to HPs. Try setting up a short match to trigger the Challenger match in quick succession, as they will only appear after completing a Smash match or returning to the Top Menu from World of Light.

Challenger Will Change Depending on Character You Use

The 8 starter Fighters (Mario, Donkey Kong, Link, Samus, Yoshi, Kirby, Fox, Pikachu) each has specific group of characters they can unlock in the Classic Mode. The Challenger appearing at the end of the Smash Mode are decided upon which character you use on that match.

Complete Specific Stage in World of Light to Unlock

By completing specific stages in the World of Light, you will be able to use them as a playable character not only in World of Light, but also in other game modes as well.

Unlock Character in World of Light to Use in This Mode

Characters unlocked through other methods outside of World of Light will not be available for use in this specific Mode. You will need to complete each specific stages in World of Light to unlock them as a playable.

Check Out Which Character To Pick In First Cross Road

About vs. Challenger Match

vs. Challenger match will be a 1 on 1, single stock match. The battle stage corresponding the Challenger's related game will be featured on their battle.

What Happens When You Defeat the Challenger?

Upon defeating the Challenger, you will unlock them as a playable character to use in Smash Mode and Classic Mode.

What Happens When You Lose Against the Challenger?

If the Challenger defeats you in battle, you will be able to battle them again from the "Challenger's Approach" section under "Games & More" menu.

Challenger Rematch Can Be Played Once 10 Minutes

Even if you are defeated in a rematch, you will be able to challenge the Challengers again from the Challenger's Approach, under the Games & More section after 10 minutes.

Check Out How Do You Rematch Challengers?