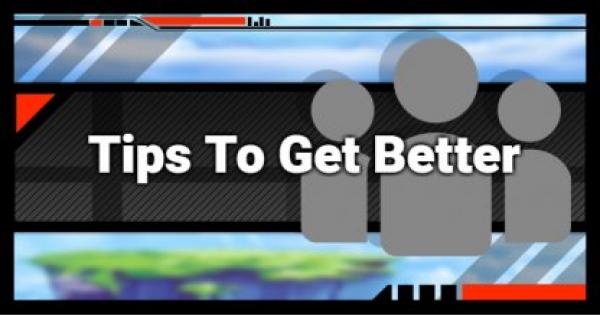 Want to improve your gameplay in SSBU? Read this guide on top tips and tricks to keep in mind to play better in Super Smash Bros. Ultimate!

Familiarize Yourself With All Roster of Fighters

Knowing which traits each Fighters have is the first step at getting better in SSBU. This not only helps you find a main fighter which fits your play style, but also helps you know how to counter your opponents' choices.

Unlocking and spending time playing with the many different fighters in SSBU will help you find the one that works the best for your play style. Try using any new Fighters you unlock to see the strength & weakness of each member of the roster.

Check Out How To Unlock A New Character!

To know your Enemy, you must become your Enemy! Being familiar with the characters, spirits, fighter moves & special attacks will help you know which moves and tactics to choose when trying to counteract your opponent's Fighter.

Most of the essential techniques in SSBU stem from basic attack and defensive maneuvers. Mastery of knowing which moves to use in each combat situation help you play & react better.

You can check the Techniques List by accessing the Help menu in the game. There are videos & written descriptions that can help you understand and learn the moves better.

Practice Techniques In The Training Room

If you're not confident enough to deal with real-life players yet, you can master the basics in the Training Room. You can access this under "Games & More".

Basics Mastery Will Help Move On To Advanced Moves

Mastering the basics of moves will help you move on to more advanced moves. Once you can dodge, attack, & Smash with your eyes closed, you can create your own dangerous set of moves to push & counter against enemy attacks.

Knowing when to charge & when to fall back will help you maximize your damage output & minimize damage received. Watch your enemy's moves and learn to predict their attacks, movement direction and reach of their attacks.

There are short moments or "gaps" after an enemy's attack that leave them open & vulnerable. Watch out for these opening to throw in a damage dealing moves or Smash attack to finish them off.

There is a small gap where they are defenseless before they land on the floor. Watch for these moments and time your attacks to smash them off the ledge.

Know How To Recover From Falling Off the Ledge

You can recover from falling by jumping or by using your upper special attack. Mastery of basic moves will help you know how to recover when thrown or knocked back from the platform's ledge.

Certain Fighters such as Kirby will have the capability to jump multiple times in the air, providing extended survivability from enemy smash attacks. When hit off the ledge, try to anticipate the enemy counter attack by using the map's ledge or countering a counter move with your own.

Use Upward Special Attack To Recover

Use Block Button To Break Fall

You can break your fall & preventing yourself from falling flat on the face by pressing the Shield button right before you hit the ground. From there, you can also dodge

Use Guard To Mitigate Damage

Learning how to use Guard in SSBU will help prevent you getting damaged and even help you recover to counterattack.

You will be able to dodge enemy attacks to any direction by flicking the Joystick while guarding. This will provide you with brief moment of invulnerability, allowing you to slip past enemy attacks or create distance in between.

You will also be able to dodge attacks in mid-air by blocking in air. Note that you may only perform an aerial dodge once while in air, and will be vulnerable to attacks for a short while after dodging.

If you release your shield in the perfect moment after your opponent attacks you, your can block enemy attacks without depleting your shield gauge, where you can immediately launch a counterattack.