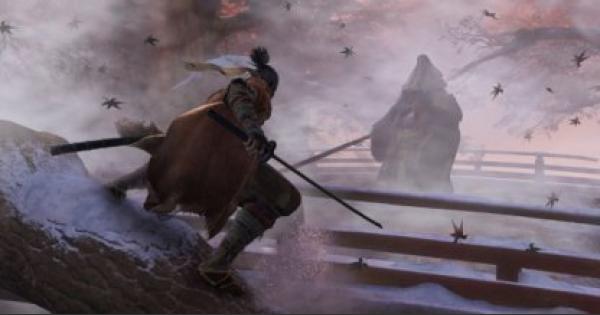 Read this Sekiro: Shadows Die Twice guide to learn all about the Bosses in the game - including boss list, strategy guides, walkthroughs, story mission appearances and more.

SPOILERS AHEAD: If you do not want to be spoiled regarding the game's plot points, we suggest you turn back now. Some contents contain spoilers for the game!

Who Was The Hardest Boss You've Faced?

One of the hardest enemy in the opening part of the game, and the first monstrous enemy. It is recommended to get Fire Vent before fighting against him.

Check Out How To Beat Chained Ogre

General Tenezen Yamauchi is protected by his soldiers. Make sure to make a situation where you can fight against Tenzen alone.

Check Out How To Beat Tenzen Yamauchi

Gyoubu Oniwa is a gatekeeper of the castle gate, boasting his mobility and variety of attacks with his horse. Use the Grappling Hook and get him down from the close distance.

Enshin is a specialist of using a spear. Clear the surrounding enemies first and do 1 vs 1.

Check How To Beat Shinobi Hunter Enshin of Misen

Juzou may be slow, but his attacks can do massive damage! He can also poison you with a green mist! Clear out surrounding enemies before engaging him!

Check Out How To Beat Juzou the Drunkard

Lady Butterfly is a master of illusions! She can summon a horde of illusions to focus fire on you. Dodge often and pick your attacks.

Check Out How To Beat Lady Butterfly

Blazing Bull is a massive bull equipped with fiery horns. Dodge to the sides and quickly strike to avoid getting hit by this massive beast! Make sure to equip Firecrackers for this fight!

Check Out How To Beat Blazing Bull

A boss that changes attack pattern as his HP nodes diminishes. Watch out for his spinning attacks, and take advantage of his slow recovery.

Check Out How To Beat The Corrupted Monk

There is a cutscene after the first game play, where Genichiro abducts the heir and cut his arm away. In the end part of the game, we expect Genichiro may appear as one of the strongest bosses in the game.

The Divine Dragon is by far the largest of the enemies Sekiro will ever fight. The mystical being procures wind attacks with every swing of its sword. The only way to beat it is to redirect the lightning it shoots back to it.

Check Out How To Beat Divine Dragon

The remnants of a fallen friend, the Demon of Hatred is a powerhouse with high damage long-range and short-range attacks. Other than its physical attacks, it puts players at a corner with its fire-imbued moves.

Check Out How To Beat Demon of Hatred

Sekiro's foster father is a force to be reckoned with as he employs the very same Shinobi techniques that Sekiro uses. From smoke bombs to firecrackers, he will use them to distract Sekiro and take a swing at him.

Check Out How To Beat The Great Shinobi - Owl

In the Shura ending route, Isshin Ashina acts as the final boss. He uses flame attacks together with quick sword attacks, however some of his attacks are slow to recover, giving an opportunity for a counter attack. Equip your Loaded Shuriken and Loaded Axe to interrupt his attacks.

Acts as the final boss for the Return, Purification, and Immortal Severance Endings. A really challenging fight with four phases. Requires mastery of the Mikiri Counter and proper dodging, as well as the Lighting Reversal in order to defeat him.