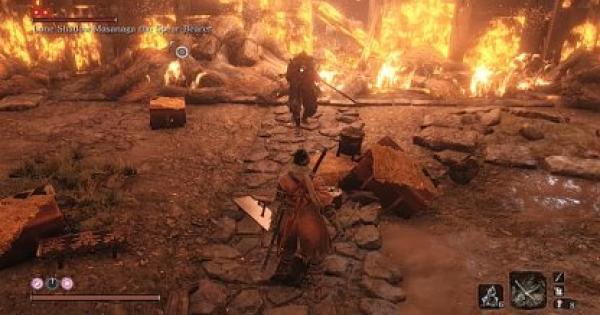 Check out this guide on how to beat the Lone Shadow Masanaga The Spear-Bearer boss in Sekiro: Shadow's Die Twice. This includes recommended Prosthetic Tools & Items, his attacks, tips & more!

When fighting him at the Great Serpent Shrine, he occasionally uses poison attacks on you. Bring some antidote powder to heal poison status and have temporary resistance to poison.

In the fight in the Hirata Estate, he summons wolves to fight for him. Use the whistle to stun the wolves.

If you fight him in Hirata Estate, he frequently summons wolves throughout the fight, while facing him in the Great Serpent Shrine makes him use poison attacks.

The one you face at Great Serpent Shrine can be deathblown by sneaking around the shrine and entering from the back. You can also eavesdrop him before striking.

Parry And Step Dodge His Attacks

Try to parry his attacks as much as you can except his poison attacks as this can lead to poison status buildup.

He spins his body while he kicks you. Parry his kicks.

He jumps up and lands, and immediately performs the perilous sweeping attack. Parry his landing kick and jump as he performs the sweep.

He raises his sword while lowering his stance and charges in for a quick slash. Parry all this attacks.

He raises his right leg to do a piercing kick. Do a Mikiri counter to deal posture damage.

A continuous flurry of kicks and ends in a perilous thrust kick. Parry all his spinning kicks and do a Mikiri counter on his thrust kick to deal damage.

Only occurs in the Great Serpent Shrine fight. He uses a poison dagger to inflict poison status. Dodge to the side instead of deflecting to avoid getting poison status.

In the second phase in the Great Serpent Shrine encounter, he empowers himself with Yashariku's sugar. He takes a bit of damage and increases attack power significantly, strengthening all his strikes.

Leave him along long enough and he can restore posture by meditating. Disrupt this with a quick attack.