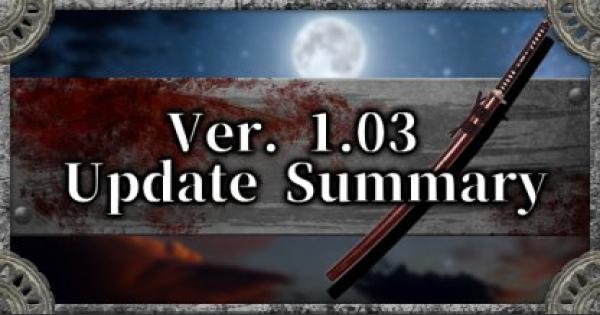 Improvements To Encourage Use Of Tools & Skills

This patch introduces Spirit Emblem cost changes to Prosthetic Tools, Combat Arts, and Spiritfall items and improves efficiency of these items and tools. This encourages players to use these skills and tools more.

Spiritfall items acquired from Headless bosses will have reduced Spirit Emblem cost to use as well.

Check Out How To Beat The Headless: Boss Fight Guide & Locations Here

The damage of the first hit of Senpou Leaping Kicks and High Monk Combat Arts has been reduced as it was causing more damage than intended. Posture damage in the latter half of the combo has been increased.

The Sabumaru Prosthetic Tool's poison build up has been increased for enemies intended to be weak against it.

The patch also reduced the vitality and posture of the Blazing Bull in order to improve pacing and time in combat with the said mini-boss. Also, the Chained Ogre inside Ashina Castle is now Red Eyed.

The patch also improves stability and performance of the game.