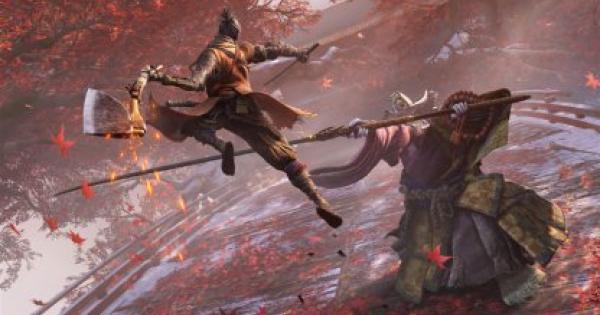 SEKIRO
How To Beat The Corrupted Monk

Check out this guide on how to beat the Corrupted Monk boss in Sekiro: Shadow's Die Twice. Recommended Prosthetic Tools and Items, Attacks & Tips!

It's possible to kill the first two HP nodes with a stealth deathblow from the trees above.

His Move Changes Depending On HP Node

Should you choose to fight him head on, his moves will change depending on his HP node depletion.

Because the monk has many consecutive attacks, it's easy to deal posture damage by parrying his attacks.

How To Kill The Corrupted Monk With Deathblows

[4/26 UPDATED] As of the recent update, Stealth Deathblow method is no longer available

Step 1: Grapple Towards The Tree On The Right

Move from the bridge to the tree on the right with your grappling hook, and then jump to the tree to the left side.

Step 2: Deathblow The Corrupted Monk From The Tree

Form the tree branch, you can do a plunging deathblow. If the deathblow prompt does not appear or if you're not near enough, sneak a bit behind him to do a deathblow.

How To Deathblow The 2nd HP Node

Step 1: Climb To The Tree Farthest Away From Idol

Step 2: Keep A Close Distance From The Monk At The Tree

There should be a grappling point to the left indicating you're in the right position.

Step 3: Do A Plunging Deathblow

Make sure to do the plunging deathblow as he reappears when prompted to easily take out his 2nd HP node. If the prompt does not appear, you are too far.

The Corrupted Monk does this on his first HP node. He swings his sword 4 times and finishes the combo with a perilous thrust. You can do a Mikiri counter on the thrust to deal posture damage.

Attack after the first perilous sweep. You can do a Mikiri counter as well on the perilous thrust.

Corrupted Monk will do a spin attack and jump back to retreat.

The monk will always use this as his opening attack when he's down to his 3rd HP node. You can parry this to deal posture damage. If parrying is too difficult, simply dodge back and keep your distance, and counter attack after the 5th spin.

The Corrupted Monk will do a counter clockwise sweeping motion, jump, and slam his sword to the ground. Dodge this move by jumping to the right.

This also appears on his 3rd phase. This move is quite unpredictable and can take out a lot of your HP if hit. Avoid by dodging to the side. The move recovers slow so hit him back when you can.

The monk will spit at you. This attack is quite quick, so watch out for the Perilous Attack prompt and dodge back.

Corrupted Monk will perform this attack only to close the gap between you and the monk. The attack is slow and can be parried.