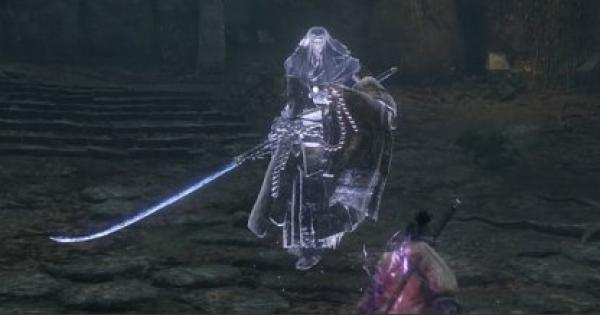 Check out this guide on how to beat the Corrupted Monk (Illusion) boss in Sekiro: Shadow's Die Twice. Recommended Prosthetic Tools & Items, Owl Attacks and Tips and more!

The Mibu Breathing Technique is a required Latent Skill for you to reach the Sanctuary in the Fountainhead Palace. This is an essential skill needed to progress the story of the game.

Though not required to defeat the Corrupted Monk (Illusion), Divine Confetti will help you deal more HP & Posture damage to this boss. If you have extra in your inventory, this will help you greatly in your fight.

Check Out Where To Get Divine Confetti!

Using Snap Seed will stun the Corrupted Monk (Illusion) for a few seconds, allowing you to put in a couple of hits before they get back their senses.

Unlike the other Corrupted Monk, this Illusion version only has 1 HP Node. If you deal your hits well & dodge or parry correctly, you'll be able to take this boss down without much of a hassle.

The Mikiri Counter is your best bet to deal big posture damage to the Corrupted Monk (Illusion). When you see the Perilous Attack symbol flash and it moves to thrust forward, use Mikiri Counter to cancel the attack.

The Corrupted Monk (Illusion) will have another Perilous Attack that involves a wide horizontal sweep with its weapon. Jump to avoid taking damage and strike back to put some hits on your own.

Parrying is the key to defeating the Corrupted Monk (Illusion). Using Mikiri Counter and parrying its spear strikes will help you deal enough Posture damage to take it down with a Deathblow.

This move has a high-risk, high-reward opening. If you parry each hit perfectly, it deals a good amount of Posture damage but if you're unable to parry, you'll get hurt pretty bad. If you're unsure of parrying, dodge or keep away to avoid taking damage.

The Corrupted Monk (Illusion) will do a Perilous horizontal sweep with its weapon that you can jump over or dodge by moving away. You cannot parry this attack so it's best to jump or dodge.

You can cancel this attack by using the Mikiri Counter, which can deal good Posture damage. Otherwise, step-dodge to your side to avoid getting hit.

The Corrupted Monk (Illusion) will jump and strike downwards towards you. You can dodge to the left or right or parry the attack to do a counter right after.