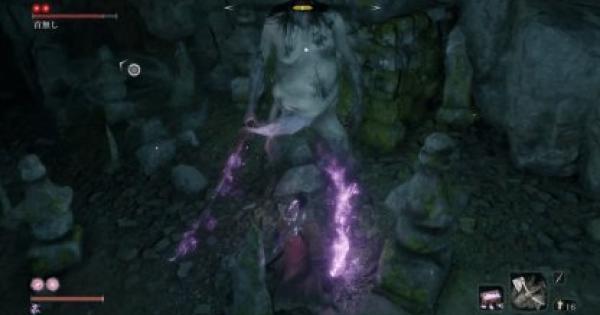 SEKIRO
How To Beat The Headless: Boss Fight Guide

Check out this guide on how to beat the Headless boss in Sekiro: Shadow's Die Twice. Recommended Prosthetic Tools and Items, Divine Confetti, Headless Attacks and Tips!

How To Find Ako

Headless Ako can be found near Under Bridge Valley.

Step 1: Grapple Up To The Bridge From Idol

From the Under Bridge Valley idol, grapple up to the bridge and turn right towards where you fight Tenzen.

Step 2: Go Past The Shrine

Take the left path and go towards the shrine and head past it.

Step: 3: Grapple To The Tree Behind The Shrine

Just behind the shrine is a tree you can grapple to.

Step 4: Jump Towards The Ledge

There's a ledge across the tree you can grab on to. Make sure to grab on to it when near it.

Step: 5 Shimmy The Ledge And Drop Down To Cave

Shimmy the ledge and at the end, you can jump across an area leading to a cave. Follow the cave forward until you find the Headless Ako inside.

Headless Gachiin can be found near the Hidden Forest idol.

Step 1: Drop Down To The Area In Front of Idol

From the Hidden Forest Idol, just proceed forward and drop down to the area below.

Step 2: Proceed Forward Towards The Item

Near Headless Gachiin is a single item lying on the ground. Head towards it to face him.

How To Find Gokan

Headless Gokan can be found near Under-Shrine Valley. This requires Mibu Breathing Technique as you'll need to traverse an underwater tunnel.

Step 1: Turn Around From Under Shrine Valley Idol

From the idol, turn around and grapple unto the grapple point.

Step 2: Grab The Ledge Across And Shimmy Forward

Grab the ledge past the two enemies here. Climb up and walk towards the right until the end.

Step 3: Climb The Ledge Up And Hug Ledge

Climb up another set of ledge, and hug the wall to proceed forward. Jump down and turn to the right until you reach a small pond.

Step 4: Swim Down The Underwater Tunnel

Jump towards the pond and dive until you reach the end of the underwater tunnel. Head for the surface to reach Gokan's lair.

Ungo can be found near the Old Grave idol, in a pond near the bridge heading towards the Great Serpent Shrine.

Step 1: Head Towards The Bridge

From the idol, turn back and head towards the bridge.

Step 2: Dive To The Pond To Find Headless

At the center of the pond is Headless Ungo. Dive underneath the pond to face him.

Another underwater Headless found near Feeding Grounds idol. Dive underneath the lake in Fountainhead Palace to find him.

Step 1: Jump Towards The Lake

From the Palace Grounds idol, jump towards the lake.

Step 2: Dive Towards The Center of the Lake

Dive towards the center of the lake to find headless Yashariku and another Headless apparition. A giant carp skeleton will indicate if you're going to the right way.

Divine Confetti makes it possible for you to attack and deal damage the Headless you're fighting. You need to use this item before the fight in order to win. You can collect Divine Confetti from the Abandoned Dungeon.

Pacifying Agent reduces your Terror and increases your Terror resistance, making it possible for you to last longer in your fight against Headless.

After using Divine Confetti, approach the Headless and wait for it to fall on the floor. This is a great opportunity to do 2-3 slashes to initiate the battle.

Deal With Slash Attacks By Dodging Instead Of Guarding

You Can Only Guard 3X Before Terror Bar Fills Up

If you guard against Headless's attacks, you can only do so 3 times before your Terror gauge fills up. If it does, you'll have the Terror status effect and you'll die in one hit. It's best to dodge when Headless attacks you with slash attacks to avoid this.

Wait For Openings After Dodging

After dodging the slash attacks, you can dash forward and hit the Headless 1-2 times. Be careful not to overextend your attacks or you may be hit by the Headless.

Turn Around When Headless Disappears

The Headless will disappear in the fight and re-appear right behind you. Immediately turn the camera around when it disappears so you can attack it 1-2 times.

Damage Is Brutal If You Don't Turn Around

The Headless will deal a massive amount of damage if it is able to move behind you and hit you. Be sure to turn your camera around immediately when it disappears!

You can determine the next attack of the Headless by checking its left hand. If it's raised up high, this means it's a hand-to-hand attack.

If the Headless's left hand is lowered, it'll do a series of side-by-side slashes, so be careful.

The Headless will slash you with side sword swings. Dodge or jump. It's not recommended to guard or deflect as your Terror gauge will build up and give you the Terror status effect.

Check the Headless's left arm to see if it'll do the arm swing attack - it does this when its arm is lowered. You can dodge this attack when the Headless does it.

Grab Attack From Behind

An attack that is hard to avoid, the Headless will disappear and re-appear from behind you, grabbing you and dealing big damage. Turn your camera around immediately when the Headless does this to avoid taking damage.

The Headless has a long-ranged attack that will have it shoot multiple projectiles at you. You can avoid taking damage by guarding.

Use Divine Confetti and Purple Gourd Before Diving

Use these items before diving underwater to build resistance to Terror resistance and to improve damage. Although not required, Divine Confetti improves damage you can do on the Headless.

Keep A Close Watch On Your Buffs

These buffs tend to wear out fast. Keep a close watch on your buffs to ensure you have Terror resistance, otherwise you can instantly die from Terror.

This only applies to Yashariku since he's accompanied by an apparition headless. Take it out first before Yashariku otherwise this fight will be harder because of Terror buildup.

Only Has 1 HP Node

The underwater fights are much easier since you only have to deal with 1 HP node. Also, you can swim away at normal speed, unlike the on-ground fights where he slows you down.

He slashes through the water to send a wave projectile. Dodge swim to the sides to avoid this attack.

He twirls his body around to throw long range terror projectiles. Swim to the side, and use this opportunity to get behind him.

Swim away as soon as the perilous prompt appears. This attack will take a huge chunk of health from you.

The Headless will swing its sword wide. You can parry this attack but ensure you have Terror resistance. Otherwise, swim away.

there is one in this cave, one in the hidden valley, one underwater at the fountainhead palace, and one in the pond/moat behind ashina castle

so far from what ive seen there are at least 4 headless. each gives a unique Spiritfall item

You can also get the Mottled purple gourd from the Mibu Village merchant to make this even easier. It reduces Terror build up.