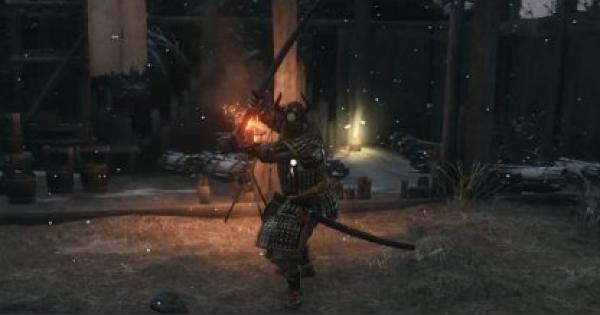 Check out this guide on how to beat the General Naomori Kawarada boss in Sekiro: Shadow's Die Twice. Recommended Prosthetic Tools and Items, Attacks and Tips & more.

General Naomori Kawarada is one of the first mini bosses you'll encounter in this game so you might have not unlocked other Prosthetic Tools yet. Don't forget that you can heal in between his attacks by using your Healing Gourd.

General Naomori Kawarada has 2 HP nodes and you can instantly take one of them out by doing a stealth Deathblow. Stay on the roof and jump on top or behind him to deal this devastating attack.

In this fight, you can parry & deflect most of General Naomori Kawarada's attacks - save for his Perilous Attack. Deflecting will deal Posture Damage to him and will make it easier for you to deal the final Deathblow.

Dodge Away When He Does Perilous Attack

When you see the red Kanji symbol flashing above you, immediately step-dodge backwards. You cannot deflect or parry perilous attacks and these can hurt your Posture Bar pretty badly, so it's best to avoid them!

Kawarada will make a single overhead swing with his sword. This attack is not that fast and can be avoided easily by dodging or deflecting. It is simple to counter as it takes a second for Kawarada to recover.

Kawarada will do two consecutive wide swings side by side. You can dodge away from this attack to be safe but you can also parry. However, be sure to hold your guard as there are two slashes in this move.

Kawarada will jump and make an overhead sword slash. Simply dodge backwards or to the side to avoid taking damage from this attack.

This Perilous Attack cannot be deflected or guarded against. To avoid taking damage from this powerful attack, be sure to dodge or jump away from Kawarada.