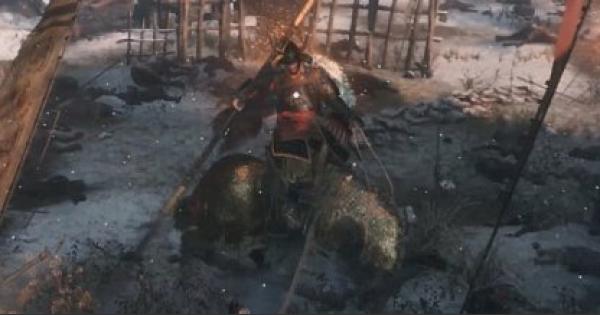 Gyoubu Oniwa likes to keep his distance in this battle. Use your Grappling Hook to close the gap and deal damage to him in close-range.

Gyoubu Oniwa runs around the map on a horse and can deal consecutive long/wide-range attacks that can kill you. Deflect these attacks to deal damage to his Posture, allowing you to build up towards a Deathblow.

After taking down Gyoubu Oniwa's 1st HP node, his attacks will change. They will be harder deflect so it's best to jump away to avoid taking damage.

You don't have many ranged attacks in this game so it's best to fight Gyoubu in close range. Always use your Grappling Hook to draw near to Gyoubu so you can deal damage to him.

Check Out How To Use Grappling Hook Here!

Use Shinobi Firecrackers to Stun

Using the Shinobi Firecrackers will stun Gyoubu's horse, allowing you to attack multiple times while he recovers. If you have a hard time connecting your hits, consider preparing this tool beforehand by purchasing "Robert's Firecracker" and installing them into your Prosthetic beforehand.

Check Out All Shinobi Prosthetic Tools

Gyoubu won't immediately die after you execute a 2nd Deathblow to completely drain his HP. Immediately press attack again to deal a 3rd Deathblow to ultimately finish him off. If you don't, he'll revive again.

A perilous attack that cannot be blocked. Avoid taking damage from this move by jumping or dodging backwards.

This attack can hit you in a 360 degree turn. If you are able to deflect this move's 4 attacks, you can deal massive damage to Gyoubu's Posture bar.

Jump To Avoid Attack Then Use Mikiri Counter

If you don't have confidence in using deflection, you can jump to avoid the hits then use Mikiri Counter to cancel the attack. This will open Gyoubu up for attacks.