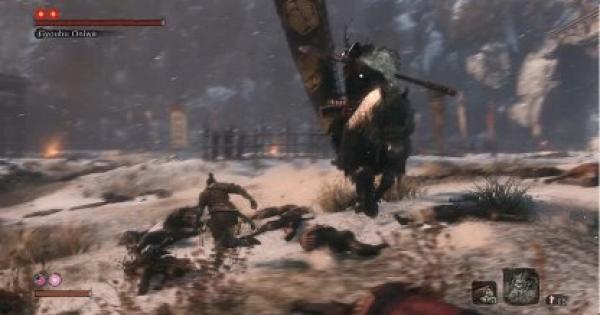 We are currently confirming all of the available items we can get in this area. This will be updated as more information is confirmed.

Fill Up His Posture Gauge With Deflections

This boss' attacks are fast and strong since he rides around on a horse. Forcing an attack against him will only leave you vulnerable to his powerful attacks. Focus on breaking his posture deflecting his own attacks.

Grapple Towards The Boss When Prompt Appears

Occasionally, a green circle will appear on the Gyoubu's head. By pressing the Grappling Hook button, you will be able to grapple towards him. By quickly closing the gap between you and him, you can get a few good hits in before retreating!

Check Out How To User Grappling Hook Here!

When the green prompt appears, Gyoubu will start to whirl his spear around the area. If you are confident enough, you can deflect his attacks instead of grappling towards him to quickly bring up his Posture Gauge!

Perform A Deathblow Once Posture Is Broken

Once the Posture Gauge of Gyoubu Oniwa is filled, you will have a small window to perform a Shinobi Deathblow. If you break his posture, immediately get in close to perform the Deathblow!

Attack Again After The Second Deathblow

Make sure to press attack during the slow-motion scene when performing the second Deathblow. Failure to do so will not kill the boss, and continue the fight.

One of the boss' Perilous Attacks is a Thrusting Attack. It would be best to just dodge out of the way. However, if you have the Mikiri Counter skill, you will be able to deflect and quickly land a counter attack!

Another Perilous Attack will cause the Boss to perform a sweep attack. He will use a sweep attack on the ground to raise up some dirt clouds. Evade this attack by jumping out of the way.