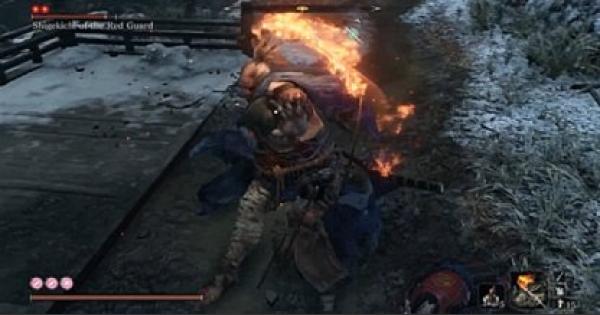 SEKIRO
How To Beat Shigekichi Of The Red Guard

Check out this guide on how to beat the Shigekichi of the Red Guard boss in Sekiro: Shadow's Die Twice. Recommended Prosthetic Tools and Items, his attacks, tips & more!

Shigekichi of the Red Guard Location

Though similar in stature and moveset with Juzuo, he instead imbues his sword with flame, and breathes fire. Be sure to carry a Dousing Powder, or the Ministry Dousing Powder to heal burn status and to gain resistance to burn.

The Withered Red Gourd slows down burn buildup and increases resistance to burn. Though unlike the dousing powder, it does not heal burn status Use this before facing Shigekichi. This is purchased from Pot Noble in the Hirata Estate.

His attacks are similar to Juzou but instead uses fire to deal burn damage. His attacks are slow, heavy and wide, and will cause a significant amount of damage if not parried or evaded.

Check Out How To Beat Juzou The Drunkard Here!

Take Out All Enemies Surrounding The Area

There are a number of enemies surrounding him, which you must eliminate first, otherwise, this will be a difficult fight. Don't mind Shigekichi if he spots you, just hide from him for a while to lose his attention.

When all enemies are cleared, deal a plunging deathblow on Shigekichi to take out 1 HP node.

His Can Only Do Flame Attacks If He Drank Alcohol

Pay attention when he drinks alcohol. A flame attack can follow anytime after he does this.

Shigekichi of the Red Guard Attacks

This attack can easily be parried to deal posture damage.

He lifts his left hand open, and will grab you. Once the prompt appears, jump back or step dodge to avoid this attack.

Douses his sword with alcohol to burn it, and deals burning damage. Burn status also builds up if you block this attack, so it's best to simply avoid it until the flame wears off.

Prepare to jump as he lowers his sword down and avoid getting hit especially if the sword is burning.

A heavy stomp attack. There's a slight delay on the stomp so time your parry well.

A heavy two hand overhead swing. Parry if this sword is not burning, but step dodge or jump back to avoid getting hit if the sword is in flames.

A quick headbutt that is followed up by a one hand slash. Parry both attacks to deal posture damage. But do be careful if the sword is burning and just avoid the attack entirely.

Strikes you with his left palm. This looks very similar to his perilous grab attack which can be a tricky mix-up. Parry when you don't see the perilous attack prompt.

Breaths a strong blast of flame towards his front. This attack does not track you so move to the sides to avoid this attack.