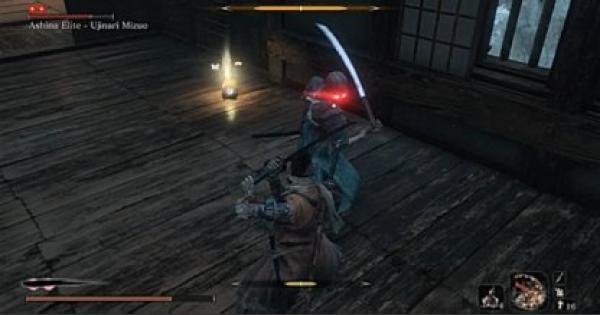 Check out this guide on how to beat the Ashina Elite - Ujinari Mizuo boss in Sekiro: Shadow's Die Twice. Recommended Prosthetic Tools and Items, Owl Attacks and Tips & more!

Ujinari Mizuo has red eyes, and is particularly weak against fire. Use the Flame Vent Prosthetic Tool to give you a window to deal damage.

Flame Vent - Where To Get & How To Use

His attacks are similar to Jinsuke Saze, so deflect as much as you can to deal posture damage. However, with red eyes, Ujinari's attack power are amplified, and if not deflected correctly, will cause a great deal of damage to your health.

Check Out How To Beat Jinsuke Saze Here!

Eavesdrop For A Bit of Lore

You can eavesdrop him before you fight him if you enter from the top area of the tower. Hide just by the stairs before you enter the area to eavesdrop.

Breaking his posture will be the most optimal way of defeating him. He takes significant damage if his attacks are deflected properly.

Break His Posture by Parrying

The most optimal way to defeat him is by parrying his attacks. His Ashina Cross attack can easily be parried once you get the rhythm of the 2 slashes. Plainly blocking his attack will cause you to take significant damage as well so time your parries well.

A glint will appear right before Ujinari unleashes this attack. Keep an eye out for it and once it appears, and get ready to parry twice!

He uses the hilt of his sword to push you back. Parry or block this attack.

As a Perilous Attack, Ujinari's sweep attack is neither blockable nor parriable. You can instead jump up or jump back to avoid it. Jumping on him will also deal posture damage.