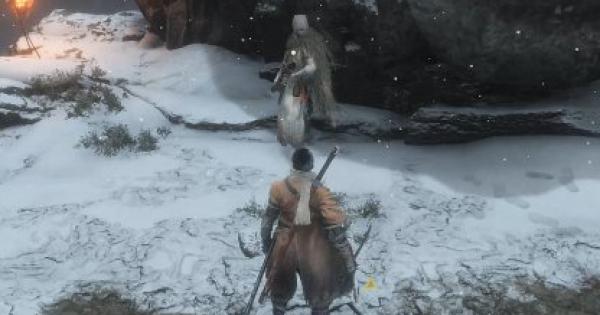 The Sabimaru will be extremely effective against Snake Eyes Shirafuji. Inflicting the Poison Status on him will deal damage over time while you wail on him with your katana!

Check Out How To Get The Sabimaru Tool Here!

Beat Shirafuji by Breaking His Posture

With Shirafuji's quick counters, being aggressive is an easy death wish for this boss fight. Stay on the defensive and focus on breaking his posture throughout the fight to open him for a deathblow.

Attack Immediately Upon Entering His Area

Don't wait around for him to attack! When you get to his area, you'll have a few seconds to freely attack him as he does his standing animation.

Bait His Melee Attacks by Staying Near Him

Shirafuji's gun is a nightmare to handle at long-range, dealing high damage to both health and posture if blocked. Stay near enough him to make him use his melee attacks for you to parry instead.

Shirafuji has only a few select moves that he cycles through. Learning the attack pattern and combos will help you to timing your parry or blocking when needed.

Save Some Spirit Emblems For The Second Phase

Despite being a very useful tool to use, the Sabimaru still uses up a Spirit Emblem per use. Take note that Shirafuji has 2 HP Nodes. Save some Spirit Emblems to use the Sabimaru on him during the second phase.

Occurs when you are out of Snake Eyes Shirafuji's reach, and occasionally in close range. Evading to either the left or right side will dodge this attack.

Keep pressing your block button as Shirafuji aims and shoots you with the gun. Keeping it up will count as a block that will make you take huge posture damage.

The attack's motion is not very fast. This can be easily avoided by triggering his first attack then moving back out of reach. The third attack will only occur if he initiates this attack pattern from the left.

You can interrupt the attack pattern by immediately approaching Shirafuji after his kick and attacking. This lets you avoid damage, and will stop him from firing the gun. Alternatively, you can sidestep to avoid the gun if you are not confident.

You can stop him from firing the gun by immediately attacking him after his melee attack. If you are not confident with the timing of his attack pattern, you can easily dodge the gunshot by stepping to either side.

The Perilous Attack can deal a great amount of damage to you. Since it is unblockable, dodge backwards a few steps. If you move in close after this attack, you can hit him once to deal some HP damage.