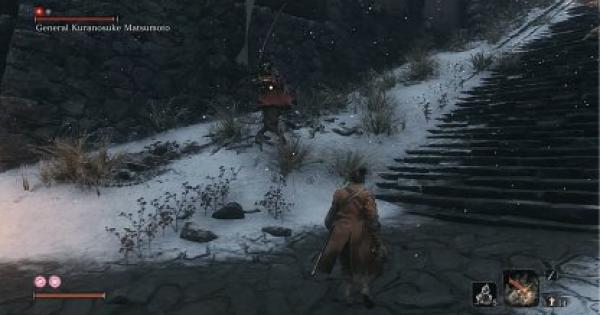 Check out this guide on how to beat General Kuranosuke Matsumoto boss in Sekiro: Shadows Die Twice. This includes recommended Prosthetic Tools and Items, his attacks, tips and more!

Check Out The All Area Walkthroughs!

The Loaded Axe is a useful tool to have in your arsenal in order to deal a fair amount of damage to General Matsumoto. It can also deal posture damage, and can help you break the General's posture for a Deathblow.

Four fodder enemies will be surrounding General Matsumoto. It is recommended to go after the fodder enemies first to eliminate any interference from these guys once you fight the general.

Hide Near The Sculptor's Idol To Remove Aggro

After defeating the fodder enemies, run back down the steps, and break line of sight by hiding behind the wall with the Sculptor's Idol. If done correctly, the general will stop chasing you, and return to his original position.

Start The Battle With A Deathblow

Once all fodder enemies near the general have been dealt with, start the battle off with a Deathblow. This will effectively remove one of the two health nodes the general has, making the fight easier for you!

The general will do this attack when you get too comfortable slashing at him in close distance. The best way to avoid this is by only getting a few hits on him, then backing away.

The general will usually do this move after rushing at you. You can easily avoid this by running away from him, or dodging to the side. There is a brief window where you can hit him a few times after this attack.

Since the telegraph for this attack is quite long, you will be able to react and avoid it with ease. Dodging to the side will let you counterattack him a few times before needing to back away.

The attack has short, but wide range. Dodge it by moving backwards. Remember that this attack consists of two slices, so only close in on the general after the second slice.

As soon as the Perilous symbol appears, the General will bring his sword down to the ground. Jump upwards to avoid it, and you will have a few seconds to deal some damage to him.