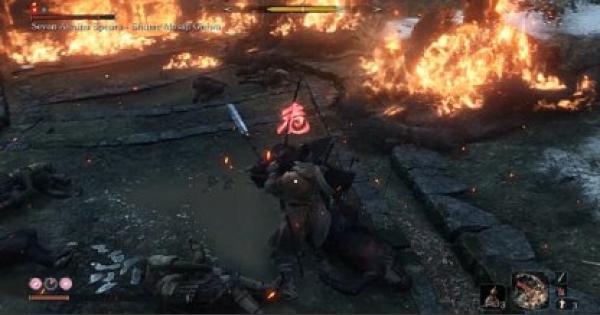 Perform a Mikiri Counter on his spear thrust attacks in order to deal significant posture damage.

Use The Ichimonji Double to deal posture & vitality damage on him. Perform this after using a Firecracker while he's stunned.

Use your firecrackers to disrupt his attacks. This also leaves him open for quick attacks.

You will need this to sneak up on Oniwa and his accomplice.

Use Gachiin's Sugar To Sneak

Oniwa is accompanied by another samurai and they are standing back to back. Use Gachiin's Sugar to help sneak up on them.

Use Puppeteer Ninjutsu On The Samurai Next To Him

Once close enough, perform a Deathblow on the Samurai next to him and use Puppeteer Ninjutsu so he can attack Oniwa as well.

The Firecracker stuns him enough for you to be able to damage him with an Ichimonji Double. Use this to deal significant posture damage!

He raises his spear to his left and glints. To avoid this attack, you can use a very well-timed Mikiri Counter to deal massive posture damage.

When he puts his spear to his right, and the perilous prompt appears, prepare to jump. Jump on him to deal posture damage.

He spins up his spear above him and swings his sword towards you for a powerful blow. Prepare to parry this move to deal a ton of posture damage.

He strikes you thrice with his spear and follows it up with a powerful swing. Parry all these attacks to deal posture damage but be careful as poorly timed parries can build posture damage on you instead.