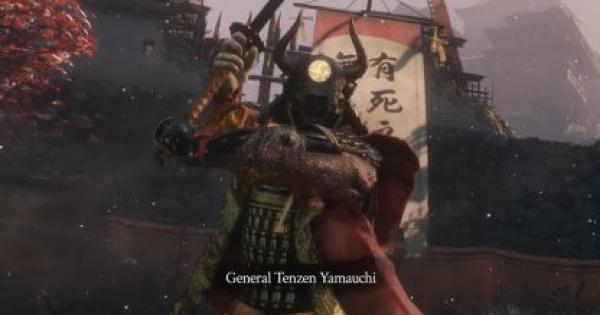 Find out how to defeat General Tenzen Yamauchi in Sekiro: Shadows Die Twice in this guide. This includes his battle moves, gameplay & combat tips!

Click to Enlarge
Check Out the All Area Guide Walkthroughs!

No Recommended Tools Due to Being Early in the Game

General Tenzen is one of the earlier mini boss that you will fight in the game, greatly limiting the Tools that you can use. He also doesn't have anything in particular that you need to counter with a Prosthetic Tool.

Start Fight with an Assassination Deathblow

General Tenzen will have 2 Health Nodes, meaning he'll only be defeated after receiving Deathblows twice. Sneak up behind the General and perform an assassination Deathblow to immediately bring his Health Nodes down to 1.

Move Around Area to Create Distance

With General Tenzen's array of attacks, it's recommend to move across the area where you fight him. Circle around him and bait his attacks so you can attack back when he's vulnerable.

Jump Back to Dodge Swing Attacks

With the huge arc in which the General swings his sword, the only escape is to either jump back or jump farther to the side. Remember to move back twice as he does 2 consecutive swing attacks.

Dodge to the Side to Escape Overhead Attack

Jumping when the General does his overhead attacks puts you at risk of being hit by it. Instead, dodge to your side and attack him as he brings his sword back up.

Don't let the General complete his stance as that will take a major chunk off the damage to his posture. Rush and attack him to interrupt the recovery!

The General will also have another attack by drawing back his sword. If the sword glints, he will thrust his sword towards you. If you have the Mikiri Counter skill, you will be able to counter this. If not, it is best to avoid it.