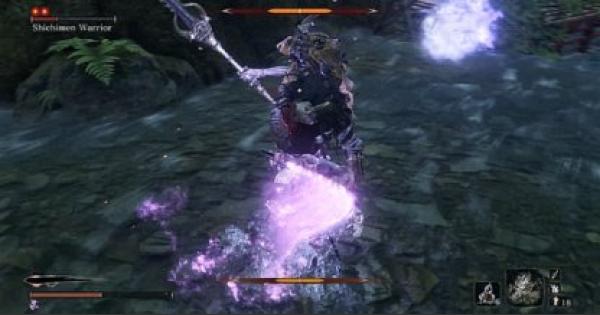 Check out this guide on how to beat the Shichimen Warrior boss in Sekiro: Shadow's Die Twice. This includes recommended Prosthetic Tools and Items, his attacks, tips & more!

The Divine Confetti is needed for this fight in order to deal significant damage to the Shichimen Warrior.

This will clear up any accumulated Terror buildup, and slow it down. Getting hit by his attacks will inflict terror and can cause instant death so this item is a must.

Similar to the effect of the Pacifying Agent but refillable when resting at an idol. This can be purchased from Exiled Memorial Mob at Mibu Village.

Shichimen Warrior is one of the few bosses you can't Deathblow. However, getting close before triggering the fight has an advantage as it allows you to get in a few hits on the get go, as in the case of the one in Fountainhead Palace.

All Three Has The Same Moveset

All three Shichimen Warriors have the same moveset. The same strategy will apply on all three.

Has An Instant Terror Death Beam

One of the moves to watch out for is his beam attack which can cause rapid buildup of the Terror gauge. Filling it up will cause instant death.

Get Up Close To Deal Damage

Shichmen Warrior tends to jump and teleport around the map which gives this fight quite a challenge. Chase after him always to be able to deal damage.

Make sure to refresh items needed in this fight. Don't let them wear out else you'll take Terror buildup more, and without Divine Confetti you won't be able to deal damage.

Run to the side to evade this move and try to get up close as he does this move so you can deal damage.

He raises his staff to charge up a ball of terror spirits. Dealing enough damage will disrupt this attack.

After taking enough damage, he'll slowly fade out and move to another location. Be quick to find him, as this is followed up a the Terror Beam.

Simply run to the side to avoid this move. However, the fight in Fountainhead will make this a bit difficult since the river is narrow.

He will jump around after taking damage to move away.

When up close, he'll swing his staff. This is a slow attack so time your parry well to deal posture damage.