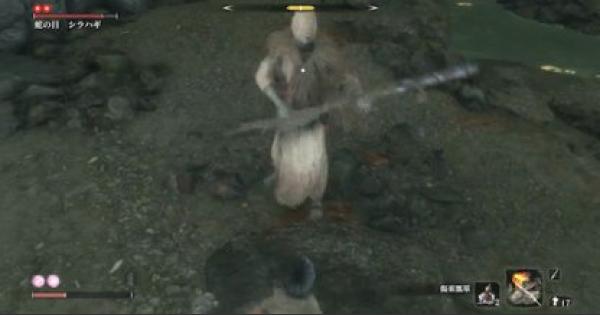 There do not seem to be any items that are very effective against Snake Eyes Shirahagi. Stock up on recovery items instead to sustain yourself longer during the battle.

Initiate Battle With A Stealth Deathblow

You can bypass Snake Eyes Shirahagi's first HP Node by sneaking up behind him and performing a Stealth Deathblow. This reduces his HP Nodes to one, saving you a lot of time and effort in this battle.

Step 1: Hide Behind The Slanted Buddha

As soon as you land on the slanted Buddha, Snake Eyes Shirahagi will be alerted. Hide behind the buddha statue so that Shirahagi will not be able to see you.

Once the marker on Shirahagi's head disappears, he will not be alerted to your presence. Use this opportunity to sneak up close to him. Make sure to approach slowly and quietly to avoid alerting him and other enemies.

Step 3: Perform A Deathblow Once You Are Near Enough

Shirahagi can attack you at distance by using his gun. This weapon deals tons of damage to you. However, it can easily be dodged by stepping to the side since it always travels in a straight line.

Move Back To Avoid Perilous Attacks

Snake Eyes Shirahagi employs an unblockable attack with a wide range. This deals tons of damage to you so it is best to avoid it. When the Kanji Symbol for Perilous Attack appears, jump back to avoid this attacks wide range.

Shirahagi will start to aim at you, and then fire his gun. The time it takes for him to fire is long so you have enough time to sidestep. After his attack, you can close the gap and get in a few hits in since he takes some time to recover.

Since the attack motion is slow, you have enough time to charge a counter attack after evading the last shot via a sidestep.

After his kick, you can dash in close and hit him to interrupt the gunshot attack. This will stop the combo, and give you a chance to get a few good hits in!

Despite having the potential to deal massive damage to you, this attack can be easily avoided by creating some distance between you and Shirahagi. Right after his attack motion, you can get in close to attack him.