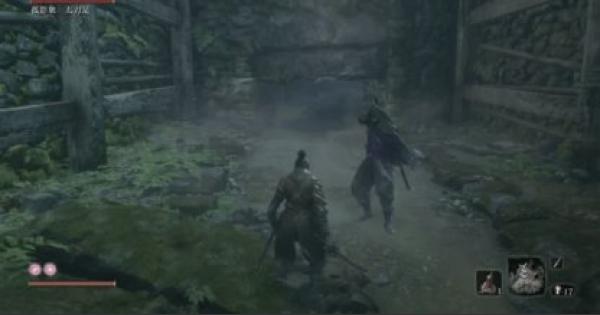 Check out this guide on how to beat the Lone Shadow Longswordsman boss in Sekiro: Shadow's Die Twice. Recommended Prosthetic Tools and Items, Attacks and Tips.

The Mikiri Counter is a great skill to use in this fight. You can use it to deflect the Longswordsman's Perilous Attack that involves a kick and increase Posture Damage on him, opening him up for a Deathblow.

Can Use Stealth Deathblow To Remove 1 HP Node

You can deal a stealth Deathblow on the Longswordsman if you climb up and jump down from the hole above him. This removes 1 HP node from his health bar but make sure to initiate the fight first by talking to him.

It's easy to build up Posture Damage on the Lone Shadow Longswordsman by simply deflecting and guarding against most of his attacks, making this a short fight. You can also do the hit-and-run technique but it will make the fight longer.

Trigger Longswordsman's Attacks With Your Own

When you slash Lone Shadow Longswordsman with your sword, he will attack you back with his own moves. Time your guards to easily deflect them and increase his Posture Bar.

Counter When He Does His Perilous Attacks

Lone Shadow Longswordsman has two types of Perilous Attacks - a charged kick & roundhouse kick. You can dodge these attacks and create an opening for you to land in a few slashes.

Longswordsman will do 2 upwards slashes in a row. You can guard here to deal Posture Damage to him.

Other Slash Attacks With Different Timing

This foe will also have other slash attacks that will have different timings. However, it's easy to see the flow of his movement and you can react according to how he moves.

This attack will involve 3 consecutive strikes that do not have that much range. You can dodge or deflect this move.

The Lone Shadow Longswordsman does a Perilous Attack involving a roundhouse kick then a jump knee kick. You can jump away to avoid getting hit.

One of Loneswordsman's moves that creates big opening for attack. Step-dodge away and then do attacks to deal Posture Damage to him.

When the Perilous Attack Kanji flashes and the Longswordsman raises his knees, he's doing a charged kick attack. Dodge or jump away to avoid getting your Posture damaged. It also has a wide range so be sure to keep your distance.

A combo move where a series of attacks ends in a Perilous Attack. You can use your Step-Dodge to avoid taking damage. You can also counterattack when the red Kanji symbol appears.