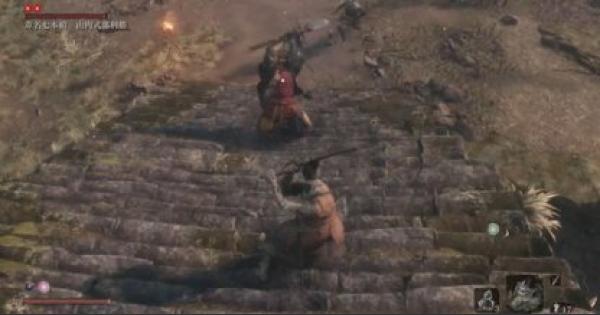 Check out this guide on how to beat the Seven Ashina Spears - Shikibu Toshikatsu Yamauchi boss in Sekiro: Shadow's Die Twice. Recommended Prosthetic Tools and Items, Attacks and Tips!

Yamauchi has a lot of powerful attacks that can deal great damage. You can deal Posture Damage by memorizing his moves and using the Mikiri Counter to deflect his Perilous Attacks.

Be Careful Of Yamauchi's Counterattacks

You can sneak up to Seven Ashina Spears - Shikibu Toshikatsu Yamauchi and deal a stealth Deathblow onto him to get rid of 1 of his HP nodes. Initiate the battle with this move to gain an advantage.

Go Through Building Side To Get Behind Yamauchi

Instead of heading towards the stairs where Seven Ashina Spears - Yamauchi is, you can head to the side of the building and drop down on the ledge from here. This way you'll be able to sneak up to him.

Go Up 2nd Floor To Hide From Enemy

If you're found by the enemies in the area, you can climb up the 2nd floor and hide out there until the enemy alert goes away.

After you successfully implemented a Mikiri Counter to cancel out Yamauchi's Perilous Attack, you need to dodge away as he'll continue to attack you.

To avoid this attack, you can use a very well-timed Mikiri Counter. This opens Seven Ashina Spears - Yamauchi up for a ton of Posture damage.

After he lands, there is a big gap between his next attack. Step-dodge to your left and right to avoid taking damage then deal attacks after he lands on the ground.