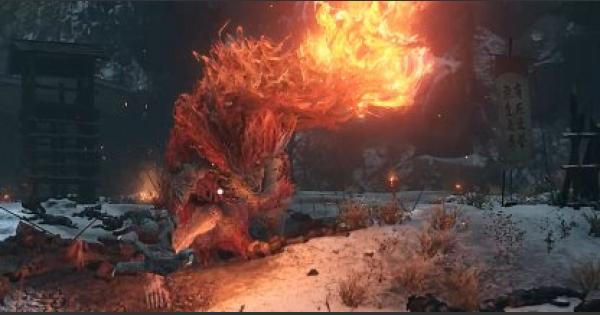 SEKIRO
How To Beat Demon of Hatred: Boss Fight Guide

Find out how to defeat the Demon of Hatred boss in Sekiro: Shadows Die Twice in this guide. This includes his battle moves, gameplay & combat tips.

Using the Malcontent Whistle on the Demon of Hatred will halt his attacks and leave him vulnerable to your strikes for a few seconds. Take note that you can only play the Whistle thrice during the fight before it becomes useless.

Defeat the Demon of Hatred by Lowering Its Health

The more HP Nodes you take down, the Demon of Hatred seemingly becomes more powerful with stronger attacks and new moves. Its moveset becomes deadlier the closer it is to being defeated.

Stay Under Demon of Hatred as Much as Possible

The Demon of Hatred's weakness is its underbelly. From there, you won't be hit by most of its attacks and could keep striking to deal damage against it.

Attacks with its Fire Arm Cannot be Parried

Sekiro is vulnerable to the fire arm of the Demon of Hatred and will receive full damage from it when trying to parry. Blocking is a better alternative because although you still get damage, it will be lower.

Fire Arm Adds to Burn Meter with Every Contact

Even when blocking the fire arm, Sekiro will still receive damage from it and add to his burn meter. It the burn meter completely fills up, the player will suffer from continuous fire damage.

Demon of Hatred Can Be Staggered

There will be moments where you can stagger the Demon of Hatred in the middle of its attacks, successfully stopping it. When it is staggered, hack away, but ensure to guard immediately when it gets back up.

The Demon of Hatred's stomps and arm swings can be parried and blocked. They each have a windup animation that will cue you in when it's about to use them.

The Homing Fireballs are relentless and will follow you until they come in contact with something else. Keep running to escape then and have them hit the ground instead.

Time your Jump, then Grapple for Perilous Belly Flop

The Belly Flop has a specific timing to successfully dodge it. When the Demon of Hatred jumps in the air, run a bit away from it, then jump when it's close to hitting the ground. It's crucial for you to grapple to the Demon of Hatred to prevent the air from throwing you away.

The Perilous Charge can easily catch you if you try to dodge to the side. You can easily escape the attack by simply jumping up as soon as the Perilous symbol is shown.

Stay Away or Keep Jumping from Perilous Arm Swings

The multiple arm swings are a bit harder to time and since they're done in succession, you can easily get caught in it. You can choose to stay away from its range or keep jumping when you find yourself in the middle of it.