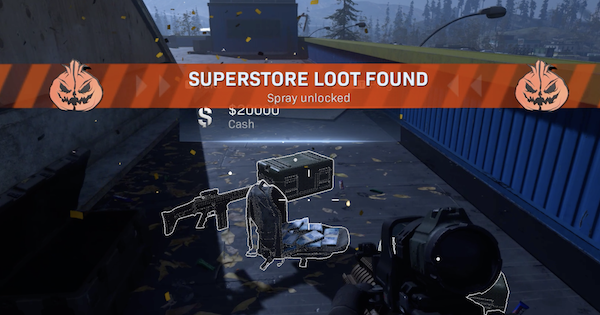 Check out this guide on the Superstore Halloween Loot for the Trick or Treat event in Warzone & Call of Duty Modern Warfare (CODMW)! Know the best chest locations and more!!!

Race To The Rooftop Chest

Probably the most easily accessible chest is the one on the rooftop of the Superstore. This chest faces south and is located near the edge. Just prep you parachute and aim for the chest before you land. Note that this is likely going to be a very hot landing, so try to maneuver and keep yourself alive.

You Can Quit After Getting The Loot

Once you get the Halloween Trick or Treat loot, it will be permanently attached to your account. This means that you can quit once you get the loot without any problems.

The loot inside the Superstore contains the event-exclusive "Corpse" spray. It is also one of the 16 free loot that you can get by looting areas of Verdansk in the Trick Or Treat event. Collecting all 16 rewards you with the event-exclusive Pumpkin Punisher AR Blueprint.

Spray Is Cosmetic Only

Sprays are one of the various ways that players can customize their in-game Operator. They do not offer any tangible benefits in combat and can be treated as cosmetic-only items.

One on the roof worked for me 1st time. I tried for 45mins until i realized where they were actually saying the location was. No one even landed near the chest. Thank you! Now just 45mins left to get quarry and farm!!!

Both chests do work you just have to keep trying as it says, superstore one is the hardest by far! Loads of players land and it’s a nightmare I’ve done it threw using this and found the two chests kept dropping on roof if didn’t get it, quit, start again. Thanks for the tips guys and gals ✌️

Yeah both of these chests don't work.