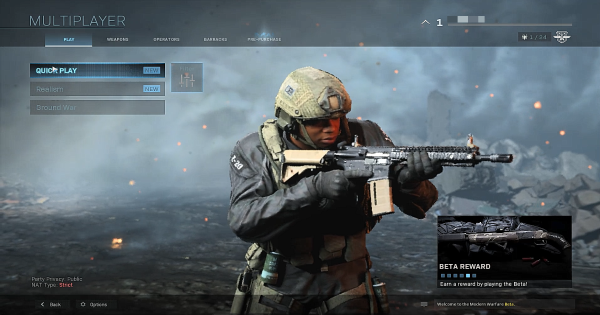 Call of Duty: Modern Warfare released an open Beta for players to try out the different modes of the game. These included several multiplayer modes, along with a Realism mode and the Ground War mode.

Perhaps the biggest feature of the open beta was to allow players to crossplay with other CoD: MW players on other platforms.

The Beta allowed players to test out some of the different game modes the game has to offer. These include several multiplayer game modes, along with a Realism mode that leveled the playing field for all players.

Quick Play mode allowed you to quickly get in on a session and join different types of multiplayer modes. There was also a filter option available if you were looking for a specific game mode to join!

The Realism mode strips down the CoD: MW experience into its barest form. Here, there is no HUD, no hit markers, and you take more damage. This levels the playing field for players as they fight to win!

The Ground War Mode lets loose players on a large scale map as they fight to take over several control points littered across the area. Aside from the large map, vehicles are also present which makes completing objectives much more dangerous!

The Beta also featured how the game ranks players as well as how players will be able to progress their characters in Multiplayer. Leveling up your ranks will unlock new equipment for you to add to your loadouts.

Check Out How To Level Up Fast Here!

The Beta gave players an early look at the different equipment available for the custom loadouts in the game. These are unlocked early on, meaning that you can start creating your own loadouts to get the upper hand in battle!

Crossplay is another feature that came with the open Beta. Here, you can enable crossplay to go up against other players on different platforms. You can also choose what type of players you go up against using different crossplay settings.

Players have the option to use either a controller or keyboard and mouse when playing on their preferred platform. They will be matched up with players using the same setup.

Crossplay supports all available multiplayer modes in the open Beta. However, there are currently no plans to support crossplay in Ranked or Competitive Tournaments.