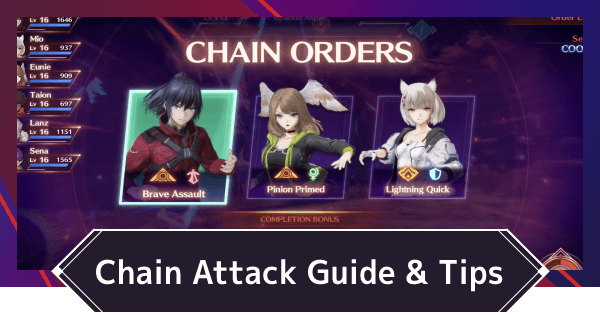 This is a Chain Attack guide for Xenoblade 3. Includes what is Chain Attack, how to increase the number of sets & damage of Chain Attack, Chain Order, and Ouroboros Orders.

Chain Attack Tips (Up To Chapter 3)

Chain Gauge decreases by 1/3 per Chain Order. However, the Chain Gauge does not decrease for Chain Orders with Heroes, so if you select Heroes as the third chain, you can make up to four Chain Attacks.

Without Heroes, the maximum number of laps is 3, and the number of selected characters is 6, so it is difficult to achieve 100% TP on the third lap.

Use Taion As An Attacker During Early Chapters

Click to Enlarge
To continue Chain Attack, it is very important to achieve a rating of Bravo or higher (150% TP) and revive 2 or more people at the next phase. It is easier to achieve Bravo or higher if Taion, which has the highest initial Term TP, is operated as an Attacker.

Be Aware Of Chain Special Effects For Each Role

The second character should be a Healer to get close to 100% TP. If you select a Healer, TP will never exceed 99%, so it will be easier to aim for TP of 150% or more (Brarvo or more) with the next character.

Achieve Order Of 100% TP As Defender

The character to be restored when the set is continued is originally random, but if the order is achieved by Defender, the characters are restored in order from the character with the highest TP. Especially in the first and second rounds, you should definitely use Defender to complete the order.

Remember The Following At The Beginning

Since Ouroboros Orders cannot be used until the third episode of the story, only the above points should be kept in mind to connect the chain.

If a Chain Attack is used while the operating character that is in Ouroboros form with Interlink Lv3, it becomes a special Chain Attack called Starting Ouroboros Orders.

▼ How To Operate Ouroboros Order

The general rule of chain attack is you need to fulfill the conditions of Ouroboros Orders at the 4th chain. You can check the order history at the right side of the screen. Make sure to select characters that will meet the conditions during the second and third order.

Make Sure To Select A Healer By 3rd Round

To reach until 5 orders, selecting a healer is a must for they do not decrease chain gauge.The characters that you can select is random and Healer's chance of appearing seems to be smaller than other classes, once a healer appears select it right away!

※ Orders that is once chosen once does not reappear. If you have 7 characters, 3 of them will appear randomly. Once you select one the choices from the second order will be selected from 6 characters that was not picked.

If you are unlucky enough not to draw Hero Orders, you will finish with Ouroboros Orders on the 4th round. Make sure to choose Interlink Characters at the 3rd round.

Ouroboros Orders are immensely powerful. Activated with the damage multiplier increased as much as possible, it can increase the damage of Chain Attack to the maximum.

By the 5th Term, the TP of all characters has increased considerably, and if one or two are selected, the TP will exceed 100%. Healer, however, never exceeds 99% TP, making it easier to use numerous Arts during Ouroboros Orders.

How Use Chain Attack More Than 6 Rounds

Possible To Do 7 Rounds If Fiona Is Used

Is There An Other Way Aside From Getting Fiona?

By no other means, the "Increase Chain Gauge" effect is more likely to use Fiona if you wish to perform a chain attack more than six times. Fiona can be used as a companion after the 5th chapter of the story.

※ The video is from the 3rd round of the Chain Attack.

Recommendation And Ability Tier Of Heroes

※This is the degree of recommendation if you focus on Chain Attack.

※The ? icon are HEROES, which is available after clearing the story.

What Is Chain Attack?

The Strongest Attack In Xenoblade 3

A Chain Attack is a special powerful technique that allows party members to take turns strategically performing Arts. You can gain an EXP bonus when you defeated an enemy with Chain Attack so it is recommended to finish boss battles & unique enemies with Chain Attacks.

Performing combos, canceling into Arts, and achieving Role Actions all help build up the Chain Attack gauge. Once it is completely full, press '+' to trigger the attack.

Consumes 1/3 Of Gauge Per Order

Chain Gauge decreases by 1/3 per Chain Order. However, Heroes' Orders do not decrease the Chain Gauge and Ouroboros Orders can be selected even if the Chain Gauge is 0, as long as the conditions are met.

The Gauge Will Be Consumed Despite Canceling Mid Fight

Chain Order Effects Are Fixed For Each Character

The order of the 6 Heroes is as follows:

Heroes Have A Unique Order

Valdi is provides recovery while Riku & Manana increases TP. The order varies depending on the Heroes. In addition, there is a bonus that the chain gauge does not decrease when selecting Heroes orders. The number of sets can be extended greatly and you can use this to your advantage if you are able to utilize it.

Ouroboros Orders Released At The End Of Chapter 3

Cancel Interlink Can Be Activated At Level 3

Fusions Are Important To Increase Interlink

Can Be Triggered According To Controlled Pair

Depending on the character that you are controlling, the order will change. The bonus that each pair gives is listed below. For the order release select, the Character will be first then the pair will be next.

Despite having high firepower for the Ouroboros Order, its power is lower than the usual five rounds of Chain Attack due to its completion in two rounds. Since the time of Chain Attack itself is shortened, it is recommended to use to destroy elite and unique monsters at the same level at a high speed, rather than to challenge stronger enemies of higher ranks.

Efficient To Use Before Overheating

The opening of Ouroboros Order can be used regardless of the remaining gauge level during interlinking. It is recommended to give damage with Ouroborosize just before it overheats and then execute a Chain Attack.

Valdi How To Unlock & Awakening Conditions

Juniper How To Unlock & Awakening Conditions

Gray How To Unlock & Awakening Conditions

Miyabi How To Unlock & Awakening Conditions

Isurd How To Unlock & Awakening Conditions

Teach How To Unlock & Awakening Conditions