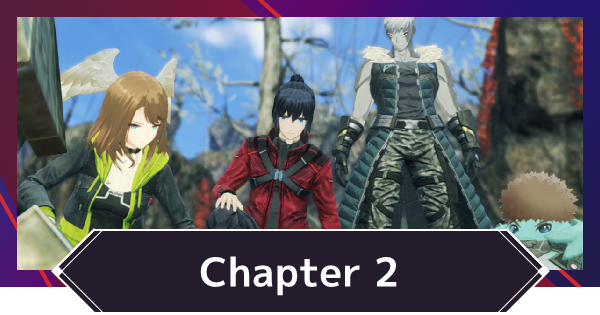 Chapter 2 Walkthrough guide for Xenoblade Chronicles 3. Learn how to unlock all Chapter 2 quests: Hillside Hulk, Moebius K, Riku & Manana, and how to defeat the Boss in this guide!

Collect Ether Once You Find Them

Ether Channels are green energy lights that sprout from the field. Here, Ether can be collected in cylinders. Ether cylinders can be used in a variety of situations, so make it a habit to collect Ether once you find them.

How To Use The Ether Cylinder

No Need To Rush To Use The Fabricator

Each Ferronis Hulk has a Fabricator nearby that can be used to manufacture collectibles by spending G. There's no need to rush to use the fabricator because you could always return via skip travel.

At the beginning of the game, you can only raise your class rank to 10, you're able to change classes until the rank reaches 10. After you reached class rank 10, the class experience you gain will be wasted if you do not change classes.

Pay Attention To The Balance of The Party

Pay attention to the ratio of attackers, defenders, and healers in your party. The recommendation is a combination of two attackers, two defenders and two healers. If the party is unbalanced, it will be difficult to win the battle due to poor damage control.

Cooking and eating food could temporarily increase the EXP and rewards you receive from winning battles. Foods can be made by materials or Nopon Coins, but Nopon Coins are quite rare and better used for other purpose. So don't use Nopon coins to create foods.

Some rest spots are canteens where you can order food. Doing so will help Manana come up with new recipes that will offer new status effects so make sure to order whenever there's a nearby canteen in the rest spots.

How The Chain Attack Works

The Strongest Attack In Xenoblade 3

A Chain Attack is a special powerful technique that allows party members to take turns strategically performing Arts. You can gain an EXP bonus when you defeated an enemy with Chain Attack so it is recommended to finish boss battles & unique enemies with Chain Attacks.

Chain Attack is a special move that is unleashed in coordination with party members. It can be activated by pressing the + button when the Chain Gauge on the right side of the screen is filled. The Chain Gauge as you perform combos, cancel into Arts and achieve Role Actions.

First, choose whose order you will follow out of the 3 characters displayed on the screen. You can make your choice after checking the completion bonuses you get for accomplishing each order.

The goal in executing the chain order is to achieve at least 100% tactical points (TP). In addition to the numbers shown above each character, bonus TP is added for the same class, same role, etc. as the order.

Make Good Use Of Chain Special Attacks For Each Role

Understanding the chain special attack for each role will help you raise TP more efficiently. The recommendation is to attack with the attacker first, then with the healer when it is about to exceed 99%, and then use the defender to complete the order when it reaches 99%.

Chain Attack can be continued if two conditions are met: "there are party members who can act" and "the chain gauge is not empty". The number of party members to be revived depends on the TP value.

One Can Be Created And All Party Members Can Equip It

Recommended Gem For All Classes

Recommended Gems For Each Roles

Create With Materials As Possible As You Can

Gems can be created with materials + Ether Cylinders or Nopon Coins. Even if they can be easily created by using Nopon Coins when the materials are not enough, but since Nopon Coins are rare, it is best to think twice about using them casually in the early stages of the game.

Interlink To Create A Powerful Form

Press The + Button When The Gauge Is Up To Activate

Interlink can be activated when the "Interlink" on the left side of the screen lights up. The gauge ranges from Lv. 0 to Lv. 3, but it is good to use it at Lv. 0 or Lv. 1 since it is difficult to raise the level in the beginning. The level of Interlink is raised by using Fusion Arts.

Fusion Arts Guide - How To Use

When the heat gauge, which gradually increases during interlinking, fills up, the interlink state will be forcibly released. You can also cancel Interlink by pressing the ↓ button, even it is barely used.

Ouroboros & Interlink - Levels & How To Use

Silvercoat Ethel is Lv 16, but there are also other three Keves that are Lv 15 in the area, so use the LR button to target on Lv 15 enemies (especially the Healer, Keves Blocker) and defeat them first before taking on the boss Silvercoat Ethel.

Consul K fights by summoning Keves Blocker (Lv 15); it could be summoned again and again even if you defeat it, therefore it is best to focus attacks on Consul K itself.

Use the Interlink and Chain Attack that you have learned so far to fight. If you find that you are losing the battle, you should review the battle system or change your equipments such as Gems.