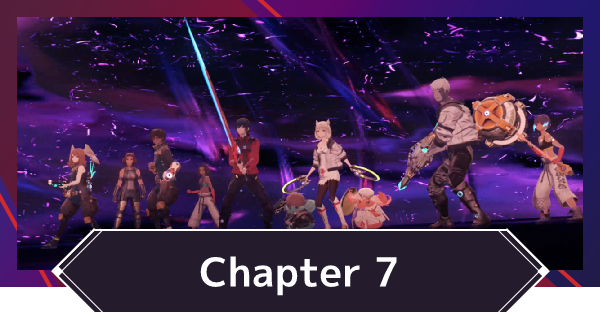 Chapter 7 Walkthrough guide for Xenoblade Chronicles 3. Learn how to unlock all Chapter 7 quests: The Ultimate Vessel, Side Story: Noah, and how to defeat the Boss in this guide!

Up to Entering Into Origin

Since you have to travel throughout the whole Aionios to get Origin metals, it'd be more efficient to move by Skip Travel to those places as close as possible.

※Since the exploration is still in progress, it is possible to find other landmarks closer than those listed above.

Be Aware When You In Cape Arcaphor

The Origin metal in Cape Arcaphor is behind the waterfall. If you approach the waterfall, a Lv60 Unique Monster will show up. You can choose to fight or not, but be aware that it might be tough to have a battle on the water.

How to Get Into Gardin Defense Base

Can't enter through the front door

In Hero Quest "Side Story: Noah", you need to get into Gardin Defense Base. Even if you defeat the Infiltrator Garnach in front of the door, the door still wouldn't open. You have to go back to the front of the bridge and shoot out the rope on the left side for Rope Sliding.

Lots of Doors Are Unopenable When Targeted

Those doors which you have to press button A to open are unopenable when you are targeted by any enemy. Even the enemies appearing here are all difficult, still unable to skip the battles before next step.

Change the Classes of Party

In the middle of Boss Battle, your party will split into Team Keves and Team Agnus. It is possible to win even if the classes are unbalanced. But it'd be better to organize each teams with the combination of Attacker, Healer and Defender. Make sure you changed the classes before starting the Boss Battle.

The Power of Ouroboros will be sealed

In the battle against Z, Chain Attack and Interlink will be disabled. Reducing over 20% of Z's HP will trigger an event that makes Interlink Pairs able to activate Chain Order set by set. From then on, they can attack using the power of Ouroboros.

While the power of Ouroboros is sealed, it is recommended to use the Talent Art "Unlimited Sword". Keep shooting Tachyon Slash in front of Z, then activate "Final Lucky Seven" to cause a large damage when the gauge of Talent Arts is full.

Hints for Defeating X and Y

Split into 2 teams to fight

In the battle against X and Y, the party will be split into Team Agnus and Keves (the heroes are in the team they belong), that makes Interlink disabled. Chain Attack could be the main method of attack and recovery, use it actively!

When X's HP is reduced beyond a certain level, he will perform an attack to reduce your party member's HP to 1. However, there is no need to panic because an event will be triggered and HP will be fully recovered after then.

Beware of the attack after event

An event occurs when Z's HP is reduced to about 60%, after then he will perform an attack "Origin Punishment". It will reduce all the party member's HP 60% and put them in a Daze state. Be prepared to recover HP.

Beware of the total attack of "Infinite Finale"

▲When "Infinite Finale" is shown at the top of screen, it means he is going to attack after evading all the attacks from your party.

The random total attack "Infinite Finale" is the most alarming attack in the battle against Z Infinity. If the healers are incapacitated, the situation will become much worse.

It is a sign when all our attacks are evaded. Make preparations for the coming attack, like "becoming invincible through Interlink", "using Chain Attack to recover while being attacked" and "recovering in advance to survive the attack".