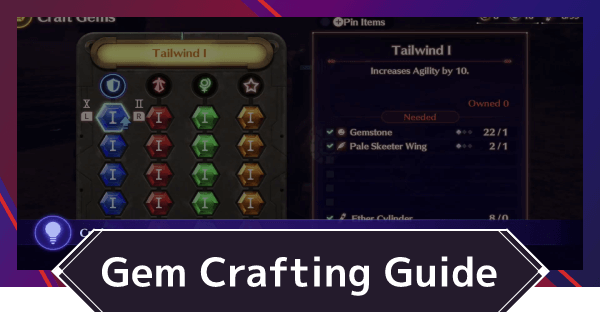 What Is Gem Crafting?

Gem Crafting can be done in any Rest Spot found all over the world. By collecting and synthesizing the materials specified by each gem, you can craft gems with stronger effects.

Move To A Rest Spot With Skip Travel

Players can use Skip Travel to immediately go to any discovered Rest Spot instead of walking to them. Once you've finished collecting materials, open Map then Skip Travel to a Rest Spot and use Gem Crafting.

You can equip the gems you created from the Characters screen in the menu. Use Gems that go well with your character's class. There are Gems that works better for Attackers and Healers so take note of them.

Gems have levels ranging from 1-10 when crafted. Note that you can craft Gems at specific levels instead of needing to make them one level at a time. If you can create Level 3 Gems, you can skip levels 1 and 2. The materials for the two skipped levels will not be consumed.

Created Gems Can Be Duplicated & Equipped

Gems are not like Accessories in that the number of Gems you can equip depends on how many you have. Gems you create can be equipped for each Characters, so there is no need to create multiple Gems with the same effect.

How To Craft Gems

Gem Crafting uses materials in order to craft a gem so you need to collect the necessary materials for it. To create powerful Gems, you need a rare material or a large number of Nopon Coins. Check the materials required for the Gem that you want then go to collect it.

Creating With Nopon Coins Is Not Recommended

Required Nopon Coins For Each Level

If you want to create Gems without using materials, you will need Nopon Coins (Gold), which are difficult to obtain. Coins should be used for Accessories, so it is recommended that Gems be created by collecting materials.

▶ Nopon Coin - Locations & How To Farm

The Gems have a level of 1 to 10, and the higher the level, the stronger the effect. You can check the effects and contents of a certain gem in the Gem Craft screen. Take into consideration the effects when choosing which Gems you are going to make.