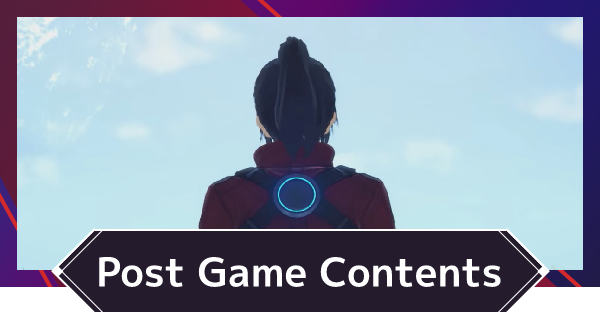 Post Game Contents (End Game Contents) in Xenoblade Chronicles 3. Check the contents that will be added after you beat the game and how to reach 100% Completion.

※This article contains spoilers for the story. Please read at your own risk.

Contents Added After Beating The Game

It means you can "start a new game with the carry-over". Part of items and system are temporarily disabled, but you can start the story from the beginning while characters retaining their levels.

Same as the 6 main characters, heroes become able to change their accessories. Equip the accessories you obtained to further strengthen them.

Give your Weapon A Special Skin

It is exclusive for Swordfighters to change the appearance of their weapon to "Monado", the weapon owned by Shulk, the protagonist in XC1. You can select "Monado" from the menu FASHION → ATTACHMENT to change the skin.

There are heroes who will not join unless you completed the main story. Since the things you have to do to unlock them are very simple, once you beat the game, make the Post-Game Heroes join your party first.

▼Spoiler! How To Unlock New Heroes

How To Unlock Nia

Nia How To Unlock & Awakening Conditions

How To Unlock Melia

Melia How To Unlock & Awakening Conditions

How To Reach 100% Completion

Raise the Affinity Level of each colony to max to obtain the Affinity Bonuses. You can get benefits that makes your adventure easier, such as increasing the speed, expanding the reachable distance of items or becoming hard to be scouted by monsters.

Raise The Level To 99

Raise to Lv99, the maximum level in Xenoblade Chronicle 3. It would be more efficient if you intentionally lower your level in Rest Spots to increase the EXP earned from battles.

Unlock and Awake All The Heroes

Unlock all the 19 heroes thoughout Aionios. It'd be better if you can not only make them join your party but also awake them. In addition, let other characters learn the class of heroes.

Find All The Seven Nopon

Complete the Quest "Uniting the Seven Nopon" which you can accept it by talking to Samon in Sentridge Harbor. Once you find all the Nopon with Ultimate Hammers throughout Aionios, it would be available to strengthen the 6 main characters' status.

Find Legacy of Seven on the sea in the Cadensia Region. Though it is quite difficult to find the item hidden on islands in a such vast sea, but the accessory you obtain is really powerful.

Defeat all the Unique Monsters that appear throughout Aionios. In parallel with the defeating, you should also collect abilities by Soul Hack which will be described below.

Defeat the strongest monster in Aionios

Soul Hack All The Unique Monsters

Complete All The Quests

Complete the quests and obtain the rewards. You can get not only EXP and G (money), but also SP. Since it is a large numbers of quests, the list below might help you to complete.