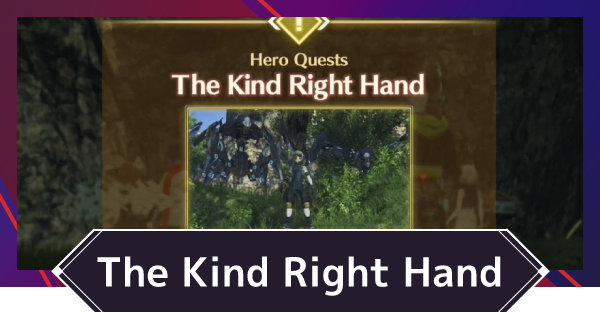 The Kind Right Hand - How To Unlock & Rewards

Occurs While Progressing Through Chapter 3

If you use and follow the course set out by the Navigation while doing Chapter 3's Main Story, you will get this without getting lost.

After the battle, Valdi will ask you to collect items that can be found in the field. These items are marked with a yellow mark on the map so head to their locations!

You can find the Levnis Endoskeleton directly west of Elsie's Spout. There is a specific way to lower the ladder on the way down, so check it out!

Next, fast travel to Elsie's Spout and head to its northernmost point. When you arrive, you will face Equites (Lv 21). You will get the required part once you beat it.

The Levnis Auxillary CPU can be found by heading straight southeast from the Levnis Self-Charger location. Once you have collected all the parts, fast travel to Elsie's Spout again.

After collecting the parts and going back to the Elsie's Spout, you will then follow a small robot. If you move too far away from it, it will stop so make sure to follow closely behind it.

When you arrive in Colony 30, you will need to fight the boss, Incomplete Siege-Lev. Since you need to have manual control during the fight, it's best to utilize Chain Attack and Interlinks to inflict damage!

Upon clearing this quest, Valdi will join your party as a hero! You will also unlock the Traversal Skill "Wall Climbing", which will allow you to climb ivy-covered cliffs.

Valdi How To Unlock & Awakening Conditions