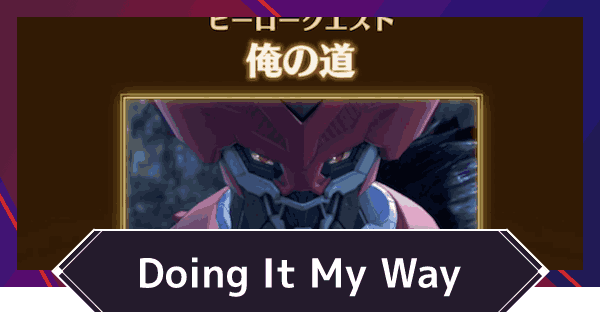 Doing It My Way is a Hero Quest in Xenoblade Chronicles 3. This guide includes how to unlock this hero quest, key location, walkthrough strategy, rewards, and how to unlock Triton!

How To Unlock Doing It My Way

Go To Colony 15 After The Event At Ishan Isle

Difficulty Is Above Recommended Lv.

Although the recommended Lv. is 46, the enemies that appear along the way are in the upper Lv. 50s. It is suggested to raise your character's level to Lv 50 or higher since avoiding battles is not always possible.

Doing It My Way Walkthrough

Keep Tabs On Any Nearby Landmarks

In order to progress in the Quest, it is necessary to complete the events that take place on several islands. After moving by boat and liberating the Landmark, use Skip Travel to get around. Note that there is no landmark in Colony 15, but there is a resting point in the cove, which should be cleared in advance.

Collect treasures around the First Pillar Remnant and talk to Lhukavu, who will give you a choice of which treasure to give him. There is no reward for choosing one over the other, therefore you can choose any of them. However, the subsequent exchange will be a little different, so save it if you want to check it out.

At the waterfall view trident, it is necessary to follow one of the two monster tracks. On the left is the poison swamp route, which is difficult to pass because you lose HP even after a short walk. Since both routes lead to the same destination, it is recommended to follow the route on the right.

When battling the defiant Triton, take out the surrounding enemies first. When only Triton is left, you can use Chain Attack to gain massive damage at once.

Triton Joins After The Battle

Triton will officially join the Heroes upon winning the battle, and will be able to change his class to "Soulhacker", which is initially inherited by Lanz.

Triton How To Unlock & Awakening Conditions