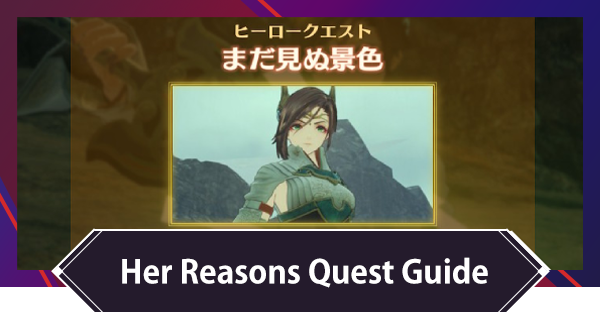 Her Reasons is a Hero Quest for Xenoblade Chronicle 3. See how to unlock, how to recruit Alexandria, unlock conditions, Alexandria location, rewards, & more for Her Reasons Quest!

Her Reasons Quest How To Unlock & Location

In order to unlock the hero quest, Her Reasons, there will be some conditions on how to unlock it. First, proceed to the Dies Arch in Fornis Region and check on Alexandria's event, Then lastly, upon approaching the Dies Arch, you will be required to defeat a level 23 enemy

▼Jump To The Walkthrough Chart

Result After Defeating The Subordinates

※ Pentelas Region can be accessible on Chapter 4
※ The location of the subordinates are indicated by a question mark "?"

Obtain Information Upon Defeating The Subordinates

Each subordinate contains a piece of information and it can be viewed at the Discuss in order to see and reveal the character's personality.

Unlock A Quest After Defeating Alexandria

After defeating the soldiers of Colony Iota, you will have a battle with Alexandria. At this point, "Her Reasons" will be automatically unlocked.

Since Moebius E is stronger than Alexandria, you can take advantage of the Chain Attacks and Interlink in order to defeat him

Alexandria Joins After Completing The Quest

Once Alexandria joins, the class Incursor will be unlocked. Taion will overtake the class.