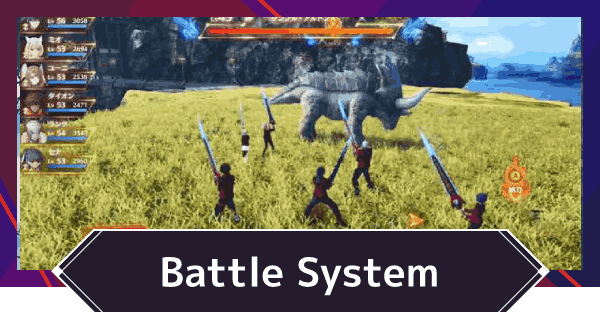 How To Start An Attack

To start an attack on an enemy, you need to draw your sword. As you approach the Enemy, it will automatically target you and you can pull out your sword by pressing the A button.

During battle, you can temporarily hide your weapon to move at a high speed. This is called quick move. Use quick move to get to the side or the back of enemies and begin attacking.

Normal Attacks Are Performed Automatically Once The Battle Started

In Xenoblade, once you approach an enemy, you will automatically attack it. You do not need to press any button for normal attacks.

Choose Arts To Use By Pressing Buttons

Arts are special techniques that each character can use. Press the X / Y / B buttons to perform the corresponding move when the Arts gauge is full.

Arts Can Be Replaced

There are at least three Arts per character, and you can freely change which Arts to use in battle from the Main Menu → Character → Arts. Choose Arts that best suit your character's role.

Use A Button To Use Talent Arts

Each Character Also Have A Unique Talent Art

Talent Arts are moslty based on the class of the character. However, as you progress through the story, you will also unlock special talent arts that is specific for a certain character. Some of these talents are better for a certain role so basing the character's class to their unique talent is recommended.

Characters can fall into three different roles: attacker, defender, and healer, each with its own characteristics. Understanding the respective roles of offense, defense, and recovery will make the game easier to play.

It is ideal for your team to have a balance number of roles. Having 2 Attackers, 2 Defenders and 2 Healers in your team would give it great stability and balance.

Attackers are the main damage-dealing class and specialize in combat to cut down the enemy's strength. They aim to inflict heavy damage from the flanks and rear to deal pressure on the enemy.

The Enemy's Attacks Are Mostly Directed To It

Because of its tremendous offensive power, it is vulnerable to being targeted by enemies. Ideally, they should be able to attack while evading the opponent's aggro.

The defender is a role that tanks enemy damage to protect attackers and healers from being harmed. Their main role is to attract the aggro of the enemies. They have defensive abilities that can lower the amount of damage they take.

Support Class That Aids Allies With Healing And Buffs

The healer is in charge of healing and reviving allies knocked off by the enemy. Like attackers, they are easily targeted by enemies as they can be easily knocked down due to their low endurance so they must be protected by defenders.

A healer is the only class that can revive knocked-out party members aside from healing and providing buffs. They have a special ability where you'll only need to long press A to get fallen members back to their feet and continue fighting. So it's important to protect them at all times and ensure that the healer does not fall first.

How To Change The Character Control

The character being controlled can be changed by holding down the ZR button and pressing the L / R button. When you need to connect a combo, or when you really need to recover, you can change the operating character according to the situation to bring the game to its ideal form.

Battle Tips - How To Win In Battle

Auto Battle Setting Is Recommended In Xenoblade 3, auto-battle is implemented. Auto-battles make it easier to attack enemies especially when you are farming Monsters and as long as your party member's level is high enough, you'll be able to win safely every time.

Cannot Be Used For Unique Monsters Or Boss Fights

Auto-battles are great in other instances, however, you will be required to battle Unique Monsters and Boss Battles on your own. So don't rely on auto-battle too much and make sure to learn how to fight without using it.

Make Full Use Of Canceled Attacks

When using a normal attack → Arts combo or Arts → Talent Arts combo, when timed correctly, can cancel an animation and produce a smooth Canceling Attack. This kind of attack makes it easier to charge the Chain Attack gauge accumulate faster so be proactive in using canceling attacks.

Let's Be Aware Of The Special Effects Of The Arts

There are arts with variable damage depending on conditions, such as back special effects and side special effects. The amount of damage can be considerably increased by meeting the conditions and should be targeted aggressively.

Aim For Massive Damage With Combos

Consecutively connecting the effects of the above arts will generate a combo. The basic combo is to connect the "Break" to damage the enemy and the "Topple" to make the enemy fall.

A burst combo that stuns the enemy, leading to a powerful "burst" blow. Burst combinations can silence enraged enemies and knock them out fast to drop items.

This is a combo that connects " Launch", which launches the enemy midair, to "Smash", which slams the enemy back down to the ground. Use this combo when you want to inflict damage.

Chain Attack Is A Must

The Chain Attack is a special move performed in coordination with party members. If used properly, it can cause considerable damage, so it is definitely something you want to learn.

When two characters are interlinked (fused), they assume the form of a giant called Ouroboros. While interlinked, the powerful Ouroboros Arts can be used without limit, so be proactive in utilizing interlinking.

Ouroboros & Interlink - Levels & How To Use

If the attack is directed toward a weaker attacker or healer, they will be at a disadvantage. Aim for a battle strategy in which the defender absorbs the opponent's aggro and takes control of the attack.

When there are multiple enemies, it is often better to concentrate on defeating them one at a time. Pressing the ZR+△ button will cause the entire party to attack the targeted Enemy, so use it effectively.

If you press and hold the ZL button during a battle, the "Tactics" screen will appear in the lower left corner. By pressing the directional button corresponding to each Tactics, the party members will move according to that Tactics.

The party members will concentrate their attacks on the target enemy that you are targeting. The goal is to defeat the Enemy one by one to make the battle a lot easier, so make good use of it.

When you want to receive range buffs or recovery effects, you can gather in the same range. However, while you are a Follow Leader, your allies will not attack, so as soon as you gather, press the same button again to disband.

The gauge of Interlink (fusion) will be easier to accumulate. However, the disadvantage is that the Chain Attack is harder to accumulate because the activation of Arts becomes slower.

What To Do If You Can't Win

From the menu, you may change the game difficulty from Normal to Easy. Setting the game to easy mode lowers the status of enemies, making them easier to defeat.

Raise The Level Of Your Characters

Simply replacing an accessory with a better effect can make the difference between winning and losing. For example, a defender might wear an accessory that increases his or her physical strength. It is important to give Accessories depending on their role in battle.

Practice How To Fight Through Training

If you find yourself struggling in battles and consistently losing, we recommend practicing in Training Mode to better understand how to use your characters and where to put them in combat. To do so, go to the Main Menu then select System menu, and choose a character to train.

Jump Back To Top ↑