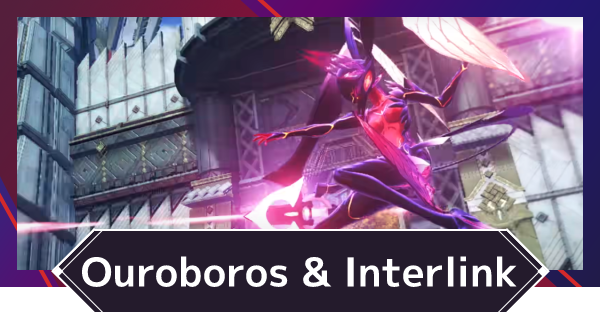 Xenoblade Chronicles 3 | Xenoblade 3
Ouroboros & Interlink - Levels & How To Use

Ouroboros and Interlink are new features in Xenoblade Chronicles 3. See Ouroboros guide, what are Ouroboros, how to use interlink, Interlink levels, characters, and all Ouroboros list!

What Are Ouroboros And Interlink?

Interlink allows specific characters to fuse together two characters and create a larger form called Ouroboros. The characters who can interlink are fixed and the type of Ouroboros depends on which character will take the lead. Players can change who takes the lead between the two characters even while Interlinked so you can adjust to what's needed in combat situations!

Everyone can Become Ouroboros

Ouroboros And Interlink - Levels And How To Use

Can Be Used During Battle By Using Directional Buttons

Interlink can be used by pressing the left directional button if you are in combat. You can also become Ouroboros right from the start of the battle.

As the story progresses, the Ouroboros Switch (↑ directional buttons) can be used during Interlink to change the person who takes the initiative. Since each player has a different skill set, switch according to the battle situation.

Ouroboros Arts Can Be Used

During Ouroboros state, players can use their Ouroboros Arts. These arts have unlimited use while Interlinked, so it's best to utilize them when in this state!

Ouroboros also has Talent Art, which can be used by building up the gauge to be Fully Charged. The gauge accumulates by using Arts, but it can also be efficiently collected by performing Canceling Attacks.

No Damage During Interlink

When in the state of Ouroboros, you will not take any damage from the opponent. The ability to attack while virtually invincible is another feature of Interlink.

Use Interlinks During Early To Mid Chapter Of The Story

It is difficult to raise the Interlink level until Fusion Arts can be used repeatedly. Therefore, it is recommended to interlink aggressively from the beginning of the battle in the early to mid chapters of the story.

The Ouroboros of each character can be strengthened with the Soul Tree. This will require the use of Soul Points or SP that you can get during combat. Here you can increase different aspects of the Ouroboros, including the attack power and the duration.